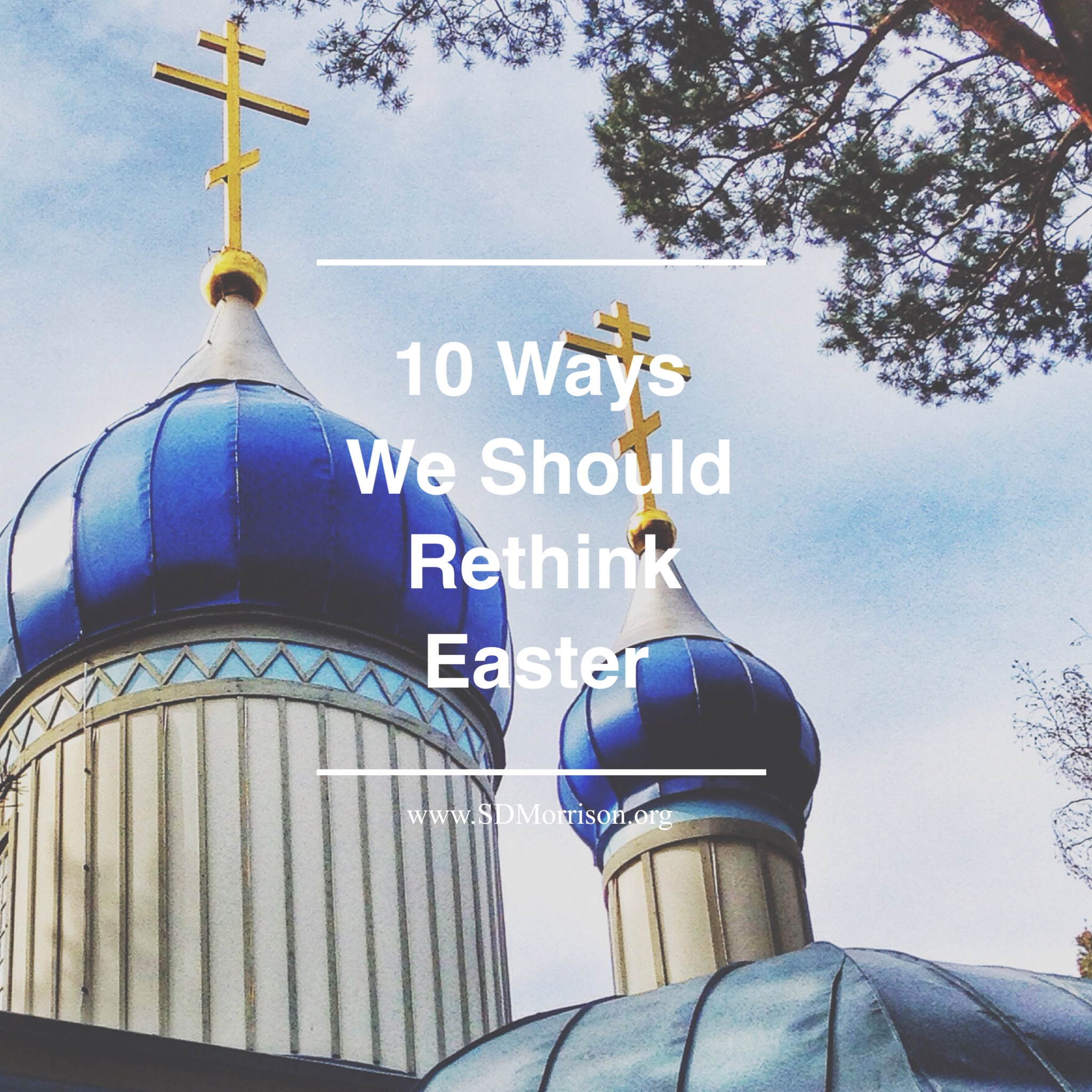 Tomorrow we celebrate Good Friday, and with it the very heart of the Gospel: the death, burial, resurrection, and ascension of Jesus Christ. I want to present ten ways that we should think differently about Easter this year. In doing so may you rediscover the beauty of the cross, and the stunning message of the Gospel.

The cross is not a dark event. The cross is the center of our joy and celebration. Far from being a defeat, the cross is a victory!

While from a humanistic perspective, the cross is weakness and failure. But from the Christian perspective, the cross is the greatest moment of triumph in all of history. As Athanasius says, “the death of all was consummated in the Lord’s body; yet, because the Word was in it, death and corruption were in the same act utterly abolished.” 1 That’s good news! Jesus fully defeated death, in His death.

The story of Jesus doesn’t end at resurrection. While the resurrection is important, it’s not the end. The Scottish theologian T.F. Torrance help me see that the resurrection, while staggering in itself, is not complete apart from the ascension.

Robert Walker, in his introduction to Torrance’s book atonement, says “The ascension is Jesus’ taking of our humanity in His person into the presence of God into the union and communion of the love of the Trinity.” 2 Or as C.S. Lewis says, “In the Christian story God descends to re-ascend.” 3 Jesus ascended, taking us up with Him; seating us in heavenly places! 4 We know for a fact in Christianity that the cross accomplished our salvation. Theories of how this happened however, are vast and wide. One of the worst, in my mind, is that of Penal Substitutionary Atonement 5 which essentially teaches that Jesus saved us from God. Meaning that Jesus was actually killed by His Father.

Did Jesus save us from God? Absolutely not! Here’s a few reasons why. 1) Paul writes in 2 Corinthians 5 that “God was in Christ, reconciling the world to himself.” 2) This notion divides the Trinity and undermines the goodness of God by creating a dark side hidden behind the back of God—which ultimately goes against Jesus’ own words, “If you’ve seen me, you’ve seen the Father.” 6 We aren’t saved from God, we’re saved from sin.

#4 The Cross Wasn’t a Pagan Ritual

The cross isn’t a form of paganism where Jesus is sacrificed up to an angry god in the hope of appease his terrible wrath. If this is true, then paganism is true. Which would be disastrous to the Gospel: making it not a Christian Gospel, but a pagan gospel.

Jesus didn’t die in order to condition God into being gracious. T.F. Torrance writes that within the Old Testament paradigm of sacrifice and atonement, we must see that the cross is not a pagan offering for the sake of forgiveness, but rather a witness to the merciful will of God. 7 The priestly system was never pagan—in the sense that it was an offering to earn forgiveness or mercy—rather, it was and is a system to manifest and give witness to the mercy of God.

The death of Jesus is the action of God to meet us in the pit of our human existence. What do we fear more than death? In order for salvation to be complete, God must meet us in the depths of our humanity. I feel like sometimes we pass over Jesus’ death as a real event, as if His being God made Him less human. He was God as a human, and in His humanity He fully felt the bitterness of death.

This is important to remember. The death of Jesus was a very real event. He actually felt the fear and abandonment that we feel. He entered into our Adamic fear and calamity and from that place He brought redemption. In His death, death itself is undone!

#6 Jesus Was Not Forsaken by His Father “My God, my God, why have you forsaken me?” is not a prayer of Jesus. Every prayer that Jesus ever prayed began with “Abba, Father!” Here Jesus is not saying that the Trinity was deconstructed and destroyed. The Trinitarian relationship between the Father, Son, and Holy Spirit remained intact on the cross!

Jesus is quoting the old testament. 8 He is fulfilling prophecy. He quotes Psalms 22, the Messianic Psalm. This Psalm, more than any other, is a clear prophecy foretelling the death of Jesus, the Messiah.

The cross was a horrific and terrifying event. It wasn’t pretty. While it is important to see the celebratory reality of the cross (see #1), it is also important to remember how expensive the party cost God.

God paid a high price for our redemption. We celebrate joyously that sacrifice, but at the same time keeping in mind, with reverence, the enormous price that was paid. Jesus died a real death, feeling the full weigh of our sin and guilt. He suffered in our place, so that we might have life. Celebrate that, but just don’t forget the price.

#8 The Cross Reveals Love, Not Wrath

The cross reveals the love of God, it does not primarily reveal His wrath. When you think of the cross, do you see the wrath of God or His love? If wrath, you need to take another look. The cross is not about wrath, it is about love.

T.F. Torrance writes that, “The cross is a window opened into the very heart of God.” 9 We understand God through Jesus: in His life, and especially in His self-giving death. The cross reveals a God who is madly in love with the world, not a God who is furiously angry at it. “For God so loved the world…” 10

#9 The Life of Jesus > The Death of Jesus Paul writes that we are “saved by His life.” 11 The life of Jesus, and the work of Jesus should be inseparable. It’s not the cross that saves us, it’s Jesus. He embodies our salvation, and reconciliation back to God.

The cross matters, but the Christ of the cross matters even more. God did not use Jesus as a tool to fix humanity. Jesus Himself is the salvation of the human race. It is in His very person, in His hypostatic union: the joining of God and man in one body that we find salvation, reconciliation, and redemption. The new covenant is a person, not a transaction!

We know what the cross accomplished. We know that because of Christ we are forgiven, reconciled, redeemed, freed from sin, in union with Christ, and participants in the eternal life of God. How it all happens is a mystery.

While there are many theories as to how the cross accomplishes all these things, we cannot get to hung up on theories. It’s the person of Jesus that saves us, not our theology. We don’t have to understand the cross to benefit from it’s blessings. The bible doesn’t give us a clear formula for exactly what happened at calvary, but it does inspire us to worship God because of it.

Let’s keep the cross mysterious. We may not understand it fully, but that’s okay. No one is asking us to.

“Trust Jesus, then. After that, theologize all you want.” 12

He has done it! It is finished!