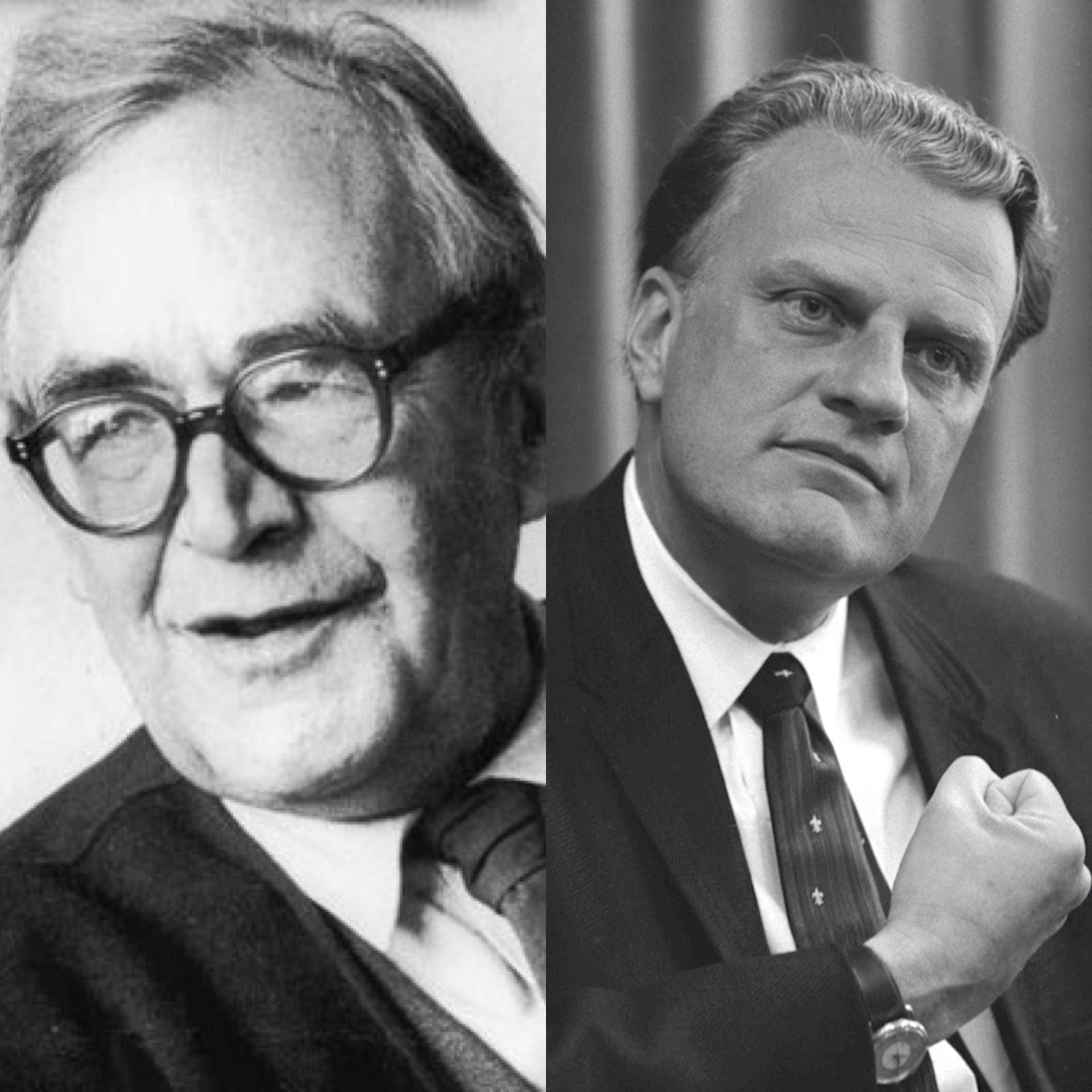 Billy Graham and Karl Barth are two monumental figures of 20th century Christianity. Though upon their meeting, it became clear the contradictions between both men, especially in their understanding of the Gospel.

Eberhard Busch writes in his biography of Barth entitled Karl Barth: His Life from Letters and Autobiographical Texts, about Barth meeting Billy Graham and the impressions he had of him:

(Thanks goes to PostBartian for this quote)

The same frontier was evident in a conversation Barth had with Billy Graham, in August 1960. His son Markus brought them together in the Valais. However, this meeting was also a friendly one. ‘He’s a “jolly good fellow”, with whom one can talk easily and openly; one has the impression that he is even capable of listening, which is not always the case with such trumpeters of the gospel.’ Two weeks later Barth had the same good impression after a second meeting with Graham, this time at home in Basel. But, ‘it was very different when we went to hear him let loose in the St Jacob stadium that same evening and witnessed his influence on the masses.’ ‘I was quite horrified. He acted like a madman and what he presented was certainly not the gospel.’ ‘It was the gospel at gun-point . . . He preached the law, not a message to make one happy. He wanted to terrify people. Threats–they always make an impression. People would much rather be terrified than be pleased. The more one heats up hell for them, the more they come running.’ But even this success did not justify such preaching. It was illegitimate to make the gospel law or ‘to “push” it like an article for sale . . . We must leave the good God freedom to do his own work.’

Evangelical Christianity in many ways learned how to preach the gospel from Billy Graham. And therefore Evangelical Christianity often has this ring to it that Barth points out. This attempt to terrify people into believing. But, as I’ve written in my book We Belong, “The gospel is not a threat, it’s an announcement.” For too long the church has followed the pattern of sin, with hell and the threat of damnation, and then Christ. But what is sin other than that which Christ has defeated? Sin does not come before Christ, Jesus Christ comes before sin. We can only know sin in the light of Christ’s victory over sin. When we preach sin first we are left with a threat-filled gospel. When we preach Christ and Him crucified first and above all else, then and only then can we rightly understand sin as a defeated enemy.

Barth argues this in CD IV.1 saying, “The reality of sin cannot be known or described except in relation to the One who has vanquished it.” Sin cannot be defined in a vacuum, in the absence of Christ. Sin, hell, and judgement must only be understood in the light of the One who has born our sins, entered into our hell, and taken upon Himself our judgement. Sin, hell, and judgement understood abstractly apart from Christ will always lead to a gospel of fear-mongering.

Classically, the doctrine of sin came after the doctrine of creation. The fall of man was understood as the prerequisite for our salvation, the issue that Jesus came to solve. But Barth argues that we must instead only place sin within the context of Christ. Because we truly cannot know sin apart from the undoing of the fall. Just as light reveals darkness by vanquishing it, so sin is known only in it’s downfall. It therefore must fall after Christology, and not before.

So as much as we in American owe a great debt to Billy Graham, I feel it’s important that we honor him while at once going beyond him into a better understanding of the gospel. The gospel is not about fire and brimstone, judgement, hell, or sin. The gospel is good news of great joy about the God who is so for man that He will stop at nothing to undo our corruption, defeat our sin, and adopt us into His life as His beloved children! To focus more on the minor issue of sin, which is minor only because now Christ has defeated it, is to turn the good news into okay news. But the gospel celebrates the gracious will of God in Jesus Christ to win the human race back to Himself. And this is what He has done! My prayer is that in the coming days of the church we will once again learn to preach good news: the happy announcement of what God has done for mankind, and not the sorrows of sin and death which He defeated.