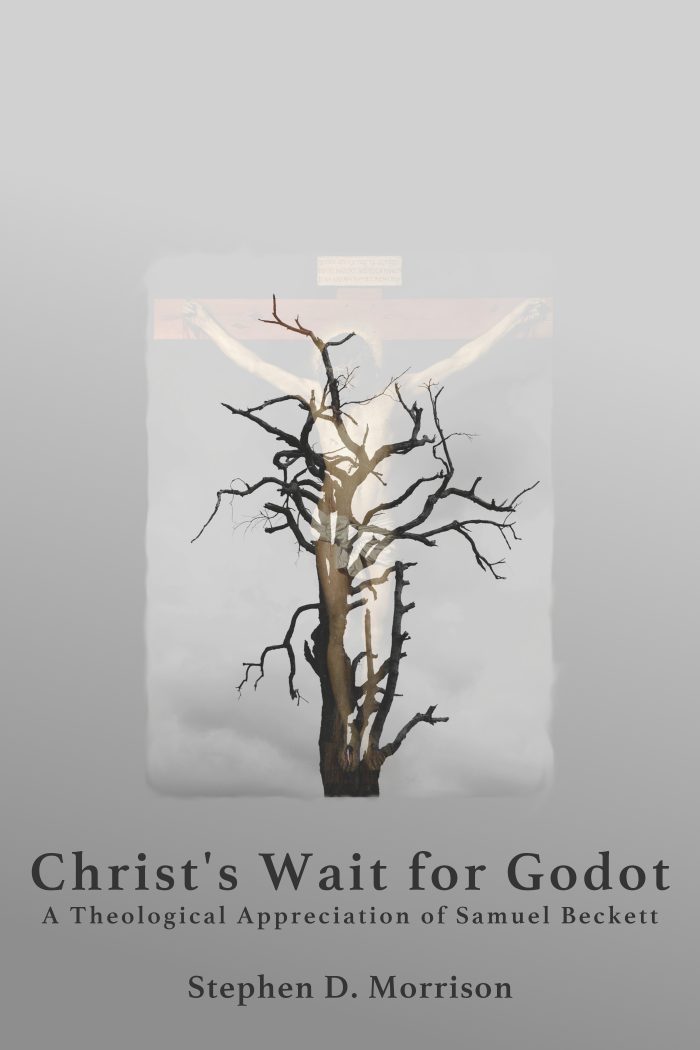 This is an excerpt from the introduction to my new book, Christ’s Wait for Godot: A Theological Appreciation of Samuel Beckett. You can buy the book directly from my website or on Amazon.

The only certainty in life is uncertainty; the only constant is chaos. Shallow versions of faith and theology try to mitigate mystery by offering cheap answers to hard questions. We deceive ourselves into believing security might come from a book, dogma, system, or tradition. But genuine faith resists all bargain answers. To fully seek the truth is to stare uncertainty straight in the eye, to wrestle with it. It is because life is uncertain that faith is necessary. Faith looks like Job on his heap of tears and ashes debating God and man, Abraham strapping Isaac to a sacrificial altar, and Jacob limping for the rest of his life after wrestling with God. What Christians today have forgotten is that faith is dangerous. Faith is a risk.

Samuel Beckett has wrestled with God, truth, and meaning perhaps more fervently than any other modern writer. His courage to challenge shallow certainties is one of the many reasons why his work remains so compelling. Beckett’s writing illustrates what true faith looks like in practice, its struggles and lamentations, but also its raw beauty. Thus, his work comforts those struggling along the path of faith and the quest for meaning—regardless of what, if any, creed they confess.

Beckett was neither a theologian nor a religious man in the traditional sense of the word, but he was, as John Pilling aptly stated, a “God-haunted” man. It is often wrongly assumed that Beckett was faithless—as if the opposite of belief is unbelief and the inverse of faith is doubt. But these are false alternatives, and Beckett defies all such labels.

[H]e cannot be described as a believer, a non-believer, an atheist or even an agnostic. He disbelieved with a large doubt or disbelieved reluctantly or, more accurately, he kept the belief and disbelief poised in his mind, always unresolved, while he went on consciously speculating about the nature and the existence of God.⁠1

Beckett’s writing expresses the struggle of faith in the pursuit of an unnamable truth. Contrary to common interpretations of Beckett, I aim to show how his spiritual sensibilities go beyond a shallow engagement with religious symbols as mere symbols, and instead, is itself a kind of faith seeking understanding, however paradoxical. His work is deeply spiritual in a strange but profound way. I think Calder was correct to conclude, “Beckett lost his faith logically, but not emotionally.”⁠2 There is a spiritual depth to Beckett’s quest for God in God-forsaken spaces, for human solidarity in the pit of human suffering, and hope in hopelessness.

The pursuit of truth is costly; it is an unpaved path. Faith and doubt are not enemies but allies in that pursuit. Faith, without doubt, professes allegiance to dogma rather than awe before a vast mystery. It is a shallow faith. That is how I would define fundamentalism: the desire for truth without mystery—a namable, controllable truth.⁠3 Yet the inverse is also true: doubt without some sense of the unknown—such as scientism and its delusion of disproving God—is just another form of fundamentalism, of demystifying the universe with cheap answers. But the world is not black and white; it is grey, so it is inexplicable.

Beckett’s words have significantly shaped my life. But it is sometimes difficult to justify my admiration. I am a Christian who has somehow found a wellspring of spiritual comfort and hope in the bleak and blasphemous words of Samuel Beckett. As strange as it may sound, I am inescapably drawn to his work, not in spite of how dark it is at times, but because of its relentless wallowing in the muck of human misery. Beckett struggled more honestly and courageously with the complexities of faith, life, and God than most popular Christian writers today would dare. Thus, I would argue that Beckett is more serious about faith and truth than those believers who only nominally wrestle with mystery. The sad reality is that faith has become a stand-in for certainty. But faith is not certain; it is a risk. And Beckett plumbed the depths while others were content splashing about in the shallows.

Theologians should recognize Beckett as a fellow traveler down the path towards speaking the unspeakable and naming the unnamable. We may not arrive at the same conclusions, but we are indeed on the same path. And that realization has led to this book and the possibility of a theological appreciation of Beckett. Our primary conversation partner will be Jürgen Moltmann, a theologian whose work inspires me to no end. By comparing their different but strikingly similar points of view, I hope to shed new light on Beckett’s project—in addition to exploring several vital insights that theology may learn from his work.

Samuel Beckett and Jürgen Moltmann may seem like an unusual pairing, but I know of no two writers better equipped to grapple with the modern world. We will also have reason to discuss Karl Barth, Dietrich Bonhoeffer, Paul Tillich, and the traditions of mystical and apophatic theology. But there are three reasons why Moltmann stands out from the rest.

First, Jürgen Moltmann has radically disrupted the conversation about suffering and God. By challenging the philosophical concept of God’s impassibility, his theology offers a unique lens through which we might arrive at a highly original reading of Beckett. The inability to reconcile God’s mercy and justice and the problem of a suffering world abandoned by God are both central themes to Beckett’s writing. Moltmann’s devotion to the suffering of God in Christ and God’s solidarity with the God-forsaken will lead to a fascinating reassessment of Beckett’s work. The same will be true for Moltmann’s unique approach to hope and protest atheism.

Second, a poetic tendency sets Moltmann’s work apart from other theologians. We seldom judge theology on its aesthetic qualities, but if a theologian cannot speak eloquently about the God of infinite wonder and beauty, then perhaps they have failed to take their subject seriously. Theology is inherently beautiful, and Moltmann exemplifies how a theologian may speak of God without becoming dry and dull.

Finally, Moltmann and Beckett complement each other because of their shared biography. Both men lived through and were directly involved in the horrors of the Second World War. Moltmann survived the brutal bombings of Hamburg (“Operation Gomorrah”), which killed an estimated 37,000 civilians and desolated the city. After suffering the horrors of the front, he surrendered to the British and spent three years as a prisoner of war. Beckett chose to stay in France—even though his native Ireland was neutral—and volunteered to help with the French resistance, for which he later was awarded the Croix de Guerre for bravery. He also worked with the Irish Red Cross in Saint Lô after the war, mostly to return to France, but the experience left its mark (see his poem named after the city). But more substantially, both men not only lived through the horrors of war but forged their unique perspectives in its fires.

Accordingly, both writers would be appropriately called “anti-fascist,” as Terry Eagleton has written of Beckett: “If Beckett was a great anti-fascist writer, it is not only because he fought with the French Resistance […] but because every sentence of his writing keeps faith with powerlessness.”⁠4 Both Moltmann and Beckett display anti-fascism in the traditional political sense. But on a more fundamental level, it is their acute sensitivity to and preference for the powerless, poor, weak, diseased, suffering, and forgotten—or in Biblical terms, their attention to the “least of these”—which makes them great anti-fascist writers. Fascism involves a fixation on strength and power. So the artistic and theological attentiveness Beckett and Moltmann show to the vulnerable and powerless goes a long way in challenging the fascist perspective.

I do not mean to imply that Beckett and Moltmann see eye to eye on everything. Far from it. What makes studying them so interesting is how these two very different writers can share so many convictions and impulses while coming to such radically divergent conclusions. Beckett is no theologian. Nor will this book try to make him into one. I have no illusions of theological harmony with Samuel Beckett. I do not think he was as systematic as his critics believe. As he warned, “The danger is in the neatness of identifications.”⁠5 Instead, this book aims to appreciate Beckett theologically. Accordingly, I aim to let Beckett remain as he is, “mess” and all, without trying to jam him into a neat theological box.

We will examine four theologically potent themes in Beckett’s work. These are not necessarily the only themes, nor are they the most important in Beckett, but I consider them vital for our purpose. The four themes are suffering, protest, quest, and hope. Here the theological overtones are both fascinating and insightful, but this conversation is not one-sided. We are not merely looking at Beckett from a theological perspective, but the goal is also to see theology in a new light. As a result, the “theology of glory” may give way to a theology of the cross.⁠6 The theology of strength and success may give way to a theology of weakness and failure. Beckett’s quest is ours, and the sooner we realize that, the sooner we will become faithful stewards of the mystery of all mysteries: God.

Theology is at its best when it is honest about the uncertainties we face and the vastness of life’s mystery. We often forget that our subject is God, the unnamable beyond. We have become complacent and comfortable, domesticating God in the process. As Kierkegaard reflected, “The fundamental error of modern times lies in the fact that the yawning abyss of quality in the difference between God and man has been removed. The result in dogmatic theology is a mockery of God.”⁠7 This analysis rings true still today. And while we may not feel quite as rigidly bound to Kierkegaard’s dualism, we would do well to remember that Beckett’s path into the “yawning abyss” is also ours. We live in a world of uncertainty; we are thrown mercilessly into the chaos of existence without a map or guide, even if we pretend otherwise. We should not ignore Beckett’s struggle with the truth. There is much to appreciate and learn from the depth of his courage and the strength of his resilience in the face of the unnamable.

Culturally, with the rising popularity of Christian fundamentalism and other forms of extremism, Beckett’s work has the potential to cure our addiction to certainty. Faith and theology are not safe endeavors; to believe God is to struggle with God for the sake of God, to wrestle like Jacob, lament like Job, and doubt like Thomas. Ethically, Beckett’s unwavering fixation on the poor and weak should evoke empathy, humanity, and a hunger for justice in us. In other words, reading Beckett has the potential of making us into more humane humans, theological theologians, and hopeful skeptics; to go on with courage and hope when all seems bleak and hopeless; to refuse to settle for cheap faith. Together with God and against God, we struggle on and on with our wounds.

3 Fundamentalism is often rooted in an understanding of the Bible that rigidly assumes its infallibility, as Jürgen Moltmann writes: “Fundamentalism fossilizes the Bible into an unquestionable authority.” The Crucified God, 8. Minneapolis, MN: Fortress Press, 1993.

6 Eberhard Jüngel: “Pauline theology as a whole is a theology of the cross and nothing else.” Death: The Riddle and the Mystery, 97. Philadelphia: The Westminster Press, 1974.

One thought on “Christ’s Wait for Godot (Preview)”