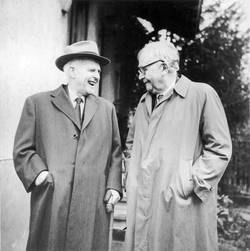 Today I finished reading Emil Brunner’s Dogmatics: Volume I, The Christian Doctrine of God. 1 There are many positive things I could say about the volume, and I did enjoy much of Brunner’s emphasis upon the revelation of God in Jesus Christ (though there were also many things I disliked).

Brunner, with Barth, fiercely rejects natural theology, though, as I mentioned in a previous post, he still retains a “revelation in nature” where Barth does not. And the disagreements do not stop here. Barth and Brunner are similar in their dedication to the word of God in Jesus Christ, but the way they each work out that revelation into theology is very different. Brunner takes issue with Barth on many things, for example Barth’s doctrine of election which Brunner feels is far too close to universalism. 2

Brunner does an excellent job showing here that the doctrine of double predestination it not a scriptural doctrine. In the theology of Zwingli especially, Brunner argues that the doctrine of predestination is a philosophical doctrine and not a biblical or theological one. It is based not on revelation, therefore, but is a  kind of natural theology which works on philosophical terms!

Writing of Zwingli’s doctrine of double predestination, which Brunner distinguishes from Calvin’s doctrine as the least biblical of the two, he writes, “All this has nothing, nothing whatever, to do with Christian theology, but it is a rational metaphysic, partly stoic in character, and partly Neo-Platonist…” 3

“The Bible does not contain the doctrine of double predestination, although in a few isolated passages it seems to come close to it. The Bible teaches that all salvation is based upon the eternal Election of God in Jesus Christ, and that this eternal Election springs wholly and entirely from God’s sovereign freedom. But wherever this happens, there is no mention of a decree of rejection. The Bible teaches that alongside of the elect there are those who are not elect, who are ‘reprobate’, and indeed that the former are the minority and the latter the majority; but in these passages the point at issue is not eternal election but ‘separation’ or ‘selection’ in Judgment. Thus the Bible teaches that there will be a double outcome of world history, salvation and ruin, Heaven and Hell. But while salvation is explicitly taught as derived from the eternal Election, the further conclusion is not drawn that destruction is also based upon a corresponding decree of doom.“ 4

Essentially, Bruner argues here that while the scriptures do include an element of “reprobation” or “non-election”, these are not eternal decrees like election. Election may be eternal, but non-election is not, according to the scriptures. God did not eternally reject some and include others, according to Brunner, God elected from eternity but He did not reject from eternity. Brunner continues to bring out this point in terms of Israel’s history.

“The Bible teaches, it is true, that God is also at work in evil and in sin where men harden their hearts and betray the Highest; but this ‘working’ is not ascribed to an eternal decree, and the ‘hardening of heart’—particularly in the decisive case of Israel—is not conceived as irrevocable. Israel, which at present is hardened and therefore rejected, can—and indeed will—still be saved if it does not remain in a state of disobedience. The Bible teaches that Judas commits his act of treachery in order ‘that the scripture should be fulfilled’, but it does not say that this is the result of an eternal decree.“ 5

Rejection, for Brunner, is not a part of the eternal Divine decree, only election is. But rejection is still at play, if only in a temporary sense. From this Brunner turns to the chief scripture often used, Romans 9-11. Brunner rightly points out that the context here is not the election of the individual, but the election of Israel. He writes,

“The Ninth chapter of the Epistle to the Romans is usually regarded as the ‘locus classicus’ of the doctrine of a double predestination, and for this reason it requires very careful consideration. Hence it is extremely important to show very clearly the connexion of this chapter with the two which follow. They do not deal with the salvation and damnation of the individual, but with the destiny of Israel. Thus the point of view itself is entirely different from that of the doctrine of predestination.” 6

Following this Brunner points out three points of misunderstanding that are often at work in those who interpret Romans 9 for proof of double predestination. He writes,

“(a) As in the whole context, so also in the example of Jacob and Esau, in the movement of thought of the Apostle Paul, this is not an argument in support of a ‘double decree’, but it is an illustration of the freedom of God in His action in the history of salvation. When we read: ‘For the children being not yet born, neither, having done anything good or bad, that the purpose of God according to election might stand, not of works but of Him that calleth …’ this does not refer to a double ‘decretum’, but to the freedom of the divine election. Here there is no question of the eternal salvation of Jacob and the eternal doom of Esau; the point is simply the part which each plays in the history of redemption. Paul wishes to show that God chooses the instruments of His redemptive action, the bearers of the history of the Covenant, as He wills. The theme of this passage is not the doctrine of predestination, but the sovereign operation of God in History, who has been pleased to reveal Himself at one particular point in History, in Israel.

“(b) Likewise in the following verses Pharaoh is simply an historic redemptive instrument in the hand of God, that instrument which, through its ‘hardening’, must serve God’s purpose. There is no question here of his salvation or condemnation. All the argument is concentrated on one point: God has mercy on whom He will, and hardens whom He will. The point of the whole is the freedom of grace.

“(c) Finally, we come to the critical main passage, verses 19-22, the point in the whole Bible which comes closest to a doctrine of a double decree—and yet is separated from it by a great gulf. The parable of the potter and the clay, taken from Isaiah 28: 16 and Jeremiah 18: 6, expresses the absolute right of God to dispose of His creature as He chooses. The creature has no right to claim anything over against God; He may do with it what He wills. He does not have to account for His actions to anyone. God is the Lord, and His authority knows no limits.

“…The passage does not say that they have been created as vessels of wrath, still less that from all eternity they have been destined for this, but that, on account of their unbelief, they are ‘fitted unto destruction.’

“In any case, the ‘vessels of wrath’ mentioned in this passage are not the ‘reprobi’ of the doctrine of Predestination. Here, indeed, there is no mention of individuals as individuals at all, but the whole People of Israel is being discussed, and the point is not that the ‘People’ as a whole will be lost eternally, but that now, for the moment, they play a negative part in the history of salvation, which, in the future, after they have been converted, will become a positive one. The final issue of the judgment of wrath will be their salvation. Here, again, we notice that there is a remarkable ‘incongruity’ between those ‘on the left hand’ and those ‘on the right’, as in Matthew 25. The ‘vessels of wrath’ are designated by an impersonal passive, they are ‘ripe for destruction’. Thus it is explicitly stated that it is not God who has made them what they are. The linguistic phrase is deliberately in the passive, denoting a present condition, and can equally well be translated ‘ripe for condemnation’. Over against them stand the ‘vessels of mercy’ whom God ‘hath afore prepared unto glory’. In the first case no active subject, and no indication of an act of predetermination; in the second instance, an active Subject, God, and a clear indication of eternal election. Thus even in this apparently clearly ‘predestinarian’ passage there is no suggestion of a double decree!“ 7

Here in Romans 9 along with both the Old and New Testaments, there is absolutely no trace of the doctrine of God’s double decree! God’s election may be eternal, but God’s rejection cannot be, according to the witness of scripture.

There are some problems I have with Brunner’s doctrine of election, but here he presents an important insight into the Calvinist doctrine of double predestination: it simply is not a biblical doctrine!

I am part of several “reformed” groups on Facebook, and I am always frustrated to see how the Calvinists in them think that the bible is filled with this double decree. But it’s not! Instead, to prove this doctrine, a Calvinists must take their philosophical notion of God’s omnipotent decree, and they must inject it into the scriptures, ignoring context, thinking they’ve “proven” their doctrine. But here Brunner shows quite well how wrong they are. The bible simply does not contain a doctrine of double predestination, as it is found in the reformed tradition. There is a biblical doctrine of election, but there is not a biblical doctrine of eternal reprobation! Calvinists would do well to read Brunner’s critique in full context (it’s free online), or better yet, to read Barth’s brilliant doctrine of election in CD II/2! 8 I don’t think Brunner is completely right about his doctrine of election, but I do think his critique of double predestination as an unbiblical doctrine is spot on. Although, for a positive work on election, please refer to Karl Barth!

I hope you enjoyed these quotes from Brunner. Let me know in a comment what you think of his critique. Is he right in his assessment of Romans 9 and the doctrine of double predestination?