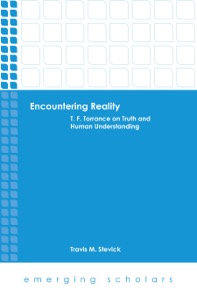 Overview: Stevick’s book was an interesting read, which engages Torrance’s epistemological developments with contemporary philosophy and science. This was undoubtably the strength of the book, alongside the clear and careful explanation of Torrance’s thought. Though more a book for the specialized, this is still an insightful critical study of Torrance’s central epistemological claims.

I had a different expectation of what I was about to read before I finished Stevick’s Encountering Truth, and to be honest, as excellent as this book was, it fell outside my realm of interest. Stevick did well in engaging Torrance with contemporary epistemology, and his critical appreciation of Torrance is one I can agree with. His conclusions did put words to some of the reservations I’ve had regarding the effectiveness of some of Torrance’s engagement with science. But all things considered this was a carefully written, scholarly study of Torrance’s thought in dialogue with modern epistemology. If this is an interest of yours, then you will likely find it far more captivating than I did.

Stevick’s stated purpose in writing is to

“unpack and critically explore what has been called the ‘fundamental axiom of Torrance’s theology,’ the conviction that we know something authentically only when we know it according to its own nature, what Torrance describes as knowledge that is ‘kata physin.‘” 1

On this level Stevick has certainly succeeded. He unpacks exceptionally well that central axiom, which is so important to Torrance, that what we know must be known in accordance with itself. In a summary of this idea, Torrance writes,

“In any rigorous scientific inquiry you pursue your research in any field in such a way that you seek to let the nature of the field or the nature of the object, as it progressively becomes disclosed through interrogation, control how you know it, how you think about it, how you formulate your knowledge of it, and how you verify that knowledge.” 2

Torrance learns this axiom from Athanasius, who Torrance considers one of the chief influences of his own thought, but also he acknowledges a debt to Kierkegaard and Anselm. Stevick’s unpacking of this notion and its implications is excellent, and on this level the book was a pleasure to read. I especially enjoyed in the first chapter how he connected this axiom with Torrance’s rejection of dualistic thinking.

There is no fault I could credit to Stevick’s book, since most of the individuals he brings Torrance into dialogue with I’ve only barely heard of before. On this level I have nothing to comment in terms of a review. On the aspect of Stevick’s careful explanation of Torrance’s epistemology, from his central axiom, to his rejection of dualism, and his stratification theory of knowledge, I think this is an excellent study. For anyone interested in the ins and outs of Torrance’s epistemological conclusions, this would be a great book to pick up.