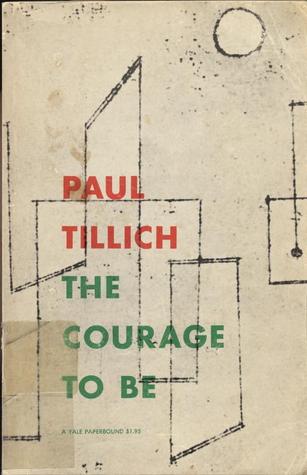 I’ve been reading recently Paul Tillich’s (in)famous book The Courage to Be. I have many suspicions about Tillich’s theology, and, from what little I’ve read of him, I inherently feel predisposed against his general method, as well as many of his conclusions. However, he is still an influential thinker and well worth the effort it takes to engage with. And sometimes he has some rather interesting and helpful things to say.

I will note too that I appreciate Tillich’s task: to make God relevant for today’s age. I am just afraid he took this too far and tried to relativized the entire Christian faith. But I appreciate his efforts, and plan to engage more with his thought as I read this book (and his Systematic Theology, which I’m planning to read sometime in the future).

This quote sums up well what I do appreciate about Tillich: “I hope for the day when everyone can speak again of God without embarrassment.” It seems to me a noble task, to make God relevant for today’s world, but the way he sought to do this is one I cannot condone.

Regardless, while I was reading The Courage to Be, I came across an insightful analysis of fundamentalism. Fundamentalism, especially in America, is a serious problem for Christianity. It is a way of thinking, more than anything else, which holds to strict black and white, either/or dogmas. For a fundamentalist, questions are not welcome, or maybe it’s better to say, questioning the “fundamentals” is not welcome, no matter how logical or factually based those questions are. It depends on who you ask what these “fundamentals” are actually, but the classic ones for Christianity tend to include biblical inerrancy, a literal seven day creation, penal substitutionary atonement, and, especially in modern times, homosexuality as a sin.

I’m not saying these are correct of incorrect just because they are the fundamentals of fundamentalists. But the main problem with fundamentalism is that it is a close-minded, black and white way of thinking about truth. Questioning these fundamentals will immediately lead to the application of the (over used) label “heretic”. So it doesn’t matter what the fundamentals are, the fundamentalist is one who cannot question them, and accordingly, who cannot allow anyone else to question them either! This is, as Tillich says in a moment, a kind of defense mechanism in reaction to modern and postmodern claims. But it is an over-reaction in most cases.

In the final analysis fundamentalism worships idols of its own making. Anything beyond questioning is an idol. Which does not mean that there is no such thing as truth, but that the truth is true no matter how harshly you question it; true remains true. Truth does not need a defender if it is true, fundamentalism decides beforehand what is true and rejects any attempt to verify or reject that claim.

But why, within fundamentalism, is there no room left for questioning or doubting “the fundamentals”? Paul Tillich sheds light on the matter:

[The fundamentalist] flees from his freedom of asking and answering for himself to a situation in which no further questions can be asked and the answers to previous questions are imposed on him authoritatively. In order to avoid the risk of asking and doubting he surrenders the right to ask and to doubt. He surrenders himself in order to save his spiritual life. He ‘escapes from his freedom’ (Fromm) in order to escape the anxiety of meaninglessness. Now he is no longer lonely, not in existential doubt, not in despair. He ‘participates’ and affirms by participation the contents of his spiritual life. Meaning is saved, but the self is sacrificed.” 1

In other words, fear; the fear of meaninglessness. There is always this fear in the questions of doubt which lead to new ways of thinking about a problem, a fear that in questioning our presuppositions our worldview will effectively become empty. But if we wish to seek the truth earnestly, we must risk asking hard questions and at times doubt our presuppositions in order to arrive at the truth. This isn’t necessarily Tillich’s point, but it’s something I’ve thought of before in regards to fundamentalism. Any system of thinking that stands above criticism is an idol.

But there is a danger here; there is the equal error of falling into a perpetual state of doubt. But this too is ultimately another defense mechanism in the form of nihilism, which at its core seeks to negate all propositions as meaningless and empty. But questions are a good thing; curiosity is a blessing. It takes risk to ask hard questions. But the adventure of discovery and of truth is well worth the effort. And in the end, truth ultimately is an eschatological term. We will never perfectly acquire truth until the eschaton. And how we all will laugh at our so-called “fundamentals” on that day!

I’ve just found a fantastic quote which sums up quite well my difficulties with Paul Tillich, and I thought to include it here:

“[Paul Tillich’s] problem and danger, to put the matter simply, is the lack of a consistent focus on the revelation of God in Jesus Christ” – Alexander McKelway