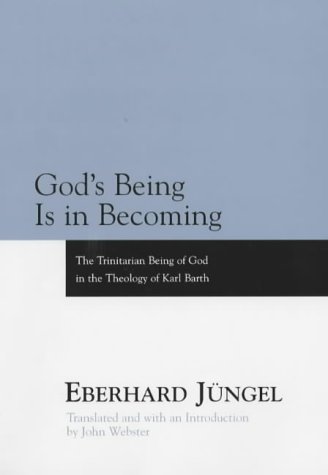 If I ever succeed in writing a book that’s even half as theologically precise as Eberhard Jüngel’s God’s Being Is in Becoming, I will die a happy man. 1 This book is an incredibly dense work of theology. With a precise eye for detail Jüngel interprets Barth’s doctrine of the Trinity in a profound and intricate way, all the while with a concise style any writer would be wise to emulate. Though because it is such a dense book, it is at once an incredibly difficult book. Though this is not exactly due to Jüngel’s style (though that’s probably also the case), but because of the subject at hand: the doctrine of the Trinity. If anywhere in theology there is required careful precision and complexity, it is here.

I am about two-thirds of the way through the book; so far I’m enjoying it immensely, and I’m looking forward to the final section. When I was reading (slowly) today, as I tried to grasp the concepts Jüngel was trying to bring forth from Barth’s doctrine of the Trinity, one point in particular struck me that I want to briefly quote and discuss here. That is, the notion that, “God corresponds to Himself”.

God Corresponds to Himself

The interesting thing about this phrase isn’t just how profound it is (though it is) and how important it is for understanding the Trinity (which it is), but the fact that for Jüngel, this phrase sums up the entirety of Barth’s project in the Church Dogmatics. He writes that the entire Dogmatics is basically an interpretation of this idea! So it is important to understand what he means by it and how it relates to the Trinity. But first, we’ll quote Jüngel for context:

“…God’s being ad extra [externally, for us] corresponds essentially to His being ad intra [internally, in Himself] in which it has its basis and prototype. God’s self-interpretation (revelation) is interpretation as correspondence. Note: as interpreter of Himself, God corresponds to His own being. But because God as His own interpreter (even in His external works) is Himself, and since in this event as such we are also dealing with the being of God, then the highest and final statement which can be made about the being of God is: God corresponds to Himself.

“Barth’s Dogmatics is in reality basically a thorough exegesis of this statement. Once it is not understood as an attempt to objectify God, but as an attempt to grasp the mystery of God where it is revealed as mystery, then this statement implies a movement which, over and above brilliance and diligence, makes possible a dogmatics of the stature of the Church Dogmatics. The Dogmatics is a brilliant and diligent attempt to reconstruct in thought the movement of the statement ‘God corresponds to Himself.'” 2

What does Jüngel mean by “correspond” here? He further states,

“That God corresponds to Himself is a statement of a relation. The statement means that God’s being is a relationally structured being.” 3

And this is what Jüngel is getting at. That “God corresponds to Himself” is another way of saying that God is who He is in His self-revelation. God’s being in revelation corresponds to His being in Himself. This point dictates the whole of the Church Dogmatics as Barth thinks in Trinitarian and Christocentric terms through the whole of God’s acts in election, creation, reconciliation, and redemption.

This is an incredibly complex subject, but Jüngel is precise in his work. This notion that God corresponds to Himself is important for Barth’s theology, and for Trinitarian theology as a whole. It is fascinating that Jüngel calls this the idea which Barth is working with in his entire Church Dogmatics, but the more I think about it the more I think he is right.

There is much to think through in regards to this idea, as it is a tremendously potent idea, but for now I wanted to show how it relates to Barth’s doctrine of the Trinity, which permeates the whole of his Dogmatics. Jüngel’s book is incredibly dense and full of insights into the being of God. I’m excited to finish reading it, and for a long time after continue thinking through these ideas.