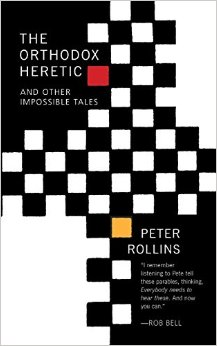 It’d be an understatement to say this week has been a devastating one in America, for many Americans and for many reasons. I wanted to share a story I often found myself thinking about, a “modern day parable” if you will. It comes from Peter Rollins’ great little book The Orthodox Heretic. It’s brought me comfort in these conflicting times, and I hope it does the same for you.

“Many centuries ago an independent island was attacked by the dictator of a nearby nation, a nation with vast resources and a mighty army. Upon landing on the island, this army moved with little resistance toward the capital city. With less than a day to decide what action to take, the leaders of the island desperately discussed what could be done in the face of the encroaching army. They were hugely outnumbered, out-resourced, and out-skilled, so defeat seemed inevitable.

The leaders never made a decision without first consulting with their religious oracle, so they approached her small dwelling on the edge of the city. The oracle was a woman who possessed great insight and had the ability to see into realms usually reserved only for the angels. Upon hearing about the invasion, she spent an entire day in deep meditation before finally coming to the leaders with a heavy heart, saying,

‘I bring sad news: I have been told that God himself has joined with our enemies and has put all of his power at their disposal.’

This ominous message sent deep fear and trembling through the hearts of the elders. In response one proclaimed, ‘We must surrender now and pray that they will have mercy on us.’ Then another responded, ‘No, let us make ready our fastest ships and set sail with as many people as we can. Perhaps we can sneak past their navy while it is dark.’ But the chief, a strong man with deep faith, remained calm throughout the debate. At the end of the discussion he said, ‘Please trust me, I know what to do in order to ensure that we make it through this dark hour.’

The chief was well respected by all, and so, in absence of a plan, they reluctantly agreed to trust him.

That day he called together all the men of the city who could fight. He then sent those with young children home, followed by those who had been married for less than a year. By the end of this process the remaining men numbered less than a few thousand, a tiny group in comparison to the army they would soon face.

These brave men were then armed and told to march behind their chief toward the encroaching army. That day there was a bloody battle and many tragically lost their lives. But, to everyone’s utter surprise, by the end of the day the dictator’s seemingly impenetrable army had been dealt a devastating blow and had turned away in retreat.

The entire island was dumbstruck as they heard how the enemy had run in fear and trembling back to their homeland. The oracle however was more confused than most, for she knew what had been kept secret from the people: that God had joined the side of the enemy and put all his vast power at their disposal. So the oracle approached the chief and said, ‘How did you know to fight when the odds where impossibly high and when you knew that God himself was pitted against you?’

But the chief merely smiled and replied, ‘Surely you know that it does not matter which side God is on. When God is involved, the oppressed always win.'”