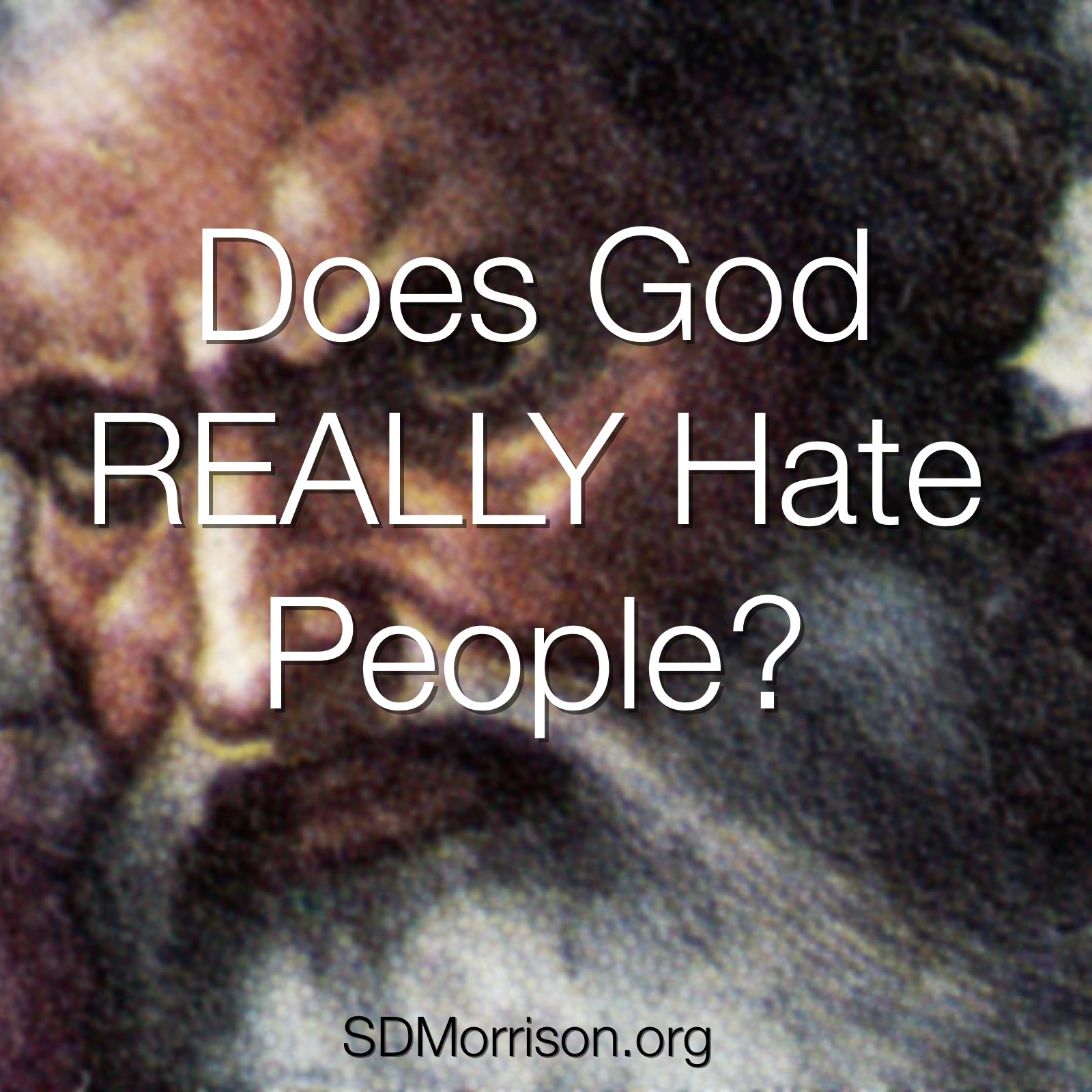 A well known American pastor, known for stirring up controversy, is at it again. A video of his is getting passed around on Facebook and twitter this week with the clear message: “God hates you!”

“God hates you. He is sick of you… He hates who you are.” (Direct quotes)

So does God really hate you? And is this supposed to be good news?

So here’s how I want to look at this. Let’s start with my response (and I hope yours too), and then let’s work our way through the issues that arise.

But what about Esau?

Paul writes in Romans 9:13, quoting Malachi 1:3, that “Esau I (God) have hated.” So right off the bat we have a little problem. God clearly says that He hated Esau, and not just in the Old Testament, Paul restates this fact in the new.

What you have to understand is that the bible, especially the Old Testament, is filled with prophetic pictures leading up to Christ. For example, right after Adam and Eve fell in the Garden, do you remember what God did? He covered them with the skin of an animal. (Genesis 3:21) Right away, even directly after the fall, God preached the good new of Christ’s death to Adam and Eve. Paul catches onto this in Romans 13:14 by saying “clothe yourself with Christ.” God was prophesying to the day Jesus would take away sin, and undo their corruption.

You see Esau, the person, was not hated by God, but rather it is what Esau represented that God hated. So what does Esau represent? The old man!

Esau and Jacob are prophetic pictures of the old man and the new man. Jacob, who’s name was later changed to Israel, is a picture of the new man who lives by faith. Jacob represented the faith-man, while Esau represented the works-man. (Just as Cain and Abel represent faith and self-works.)

God never actually hated Esau, rather, He hated what He represented. He had nothing wrong with Esau personally, even Jacob said that Esau’s “face is like the face of God.” (Genesis 33:10)

God hated what Esau represented, which is the old man.  Christ hated the old man so much that He finally put it to death on the cross! (See Colossians 3)

But what about wrath?

So what about all the bible verse that explicitly talk about the wrath of God? I think it’s important to think about how you personally define wrath. I do not believe that the wrath of God is hatred. I also don’t think wrath has, or ever will be, against people individually.

While this pastor does admit that God is love, and that He is good- he contrasts these ideas with other classical attributes you would expect. “God is holy, and just” etc.

But here’s the problem. God does not love. God is love.

God is not wrath, God has wrath. And since God is not a schizophrenic God, who hates us one day and loves us the next, then we must see that wrath is a part of love!

The wrath of God is not a separate part of God’s nature. It’s not something that you can turn on or off. There are many different attributes of God, but His attributes work together not independently.

The wrath of God is the love of God in action.

Wrath is the doing of a God who is absolutely in love with the world, and who is undeniably for us.

It’s like this. We as a society have a collective hatred towards cancer. We despise cancer. Does this mean we hate everyone who gets cancer? Do we hate cancer patients? No! We hate cancer, because we know what cancer does to those whom we love so dearly.

Likewise, God hates sin because it is a cancer that harms us. He loves us! Sin wants to destroy us, God is for us, and therefore God hates sin.

The wrath of God is the fiery resolve of God to get the best for His beloved children. Wrath is for you, not towards you.

But.. the old testament?

I have good news. The wrath of God has never been against you!

But wait? Weren’t we at one time under the wrath of God? Isn’t the old testament filled with a God who is angry at our sin? Yes, but like I said wrath has never been against you the individual. Wrath has always been against the sin that is trying to destroy you.

I like the way C. Baxter Kruger puts it:

Wrath is not the opposite of love. Wrath is the love of God in action, in opposing action. It is precisely because the Triune God has spoken an eternal Yes! to the human race, a Yes! to life and fullness and joy for us, that the Fall and its disaster is met with a stout and intolerable No! “This is not acceptable.” (From the book: Jesus and the Undoing of Adam)

The wrath of God echoes the dream of God. It is exactly because God wants the best for us, that He has wrath. God’s wrath burns against anything that seeks to harm His beloved! (Which is YOU!)

God absolutely loves you! There are no if’s, and’s or but’s about it! He is wildly ecstatic about who you are.

God created the world because He wanted humanity. He didn’t need us, nor was He just bored one day. He made us because He wants us! And this has not changed. Sin did not change the heart of God, it changed our heart!

The passionate love in God’s heart for you has never changed!

God really does love you! He has never had any hatred in His heart towards you. He is a good God, and He is in a good mood!

This is the Good News that Jesus Christ came to announce: We are loved by God! He is for us! Nothing can separate us from this love! Hooray! :)