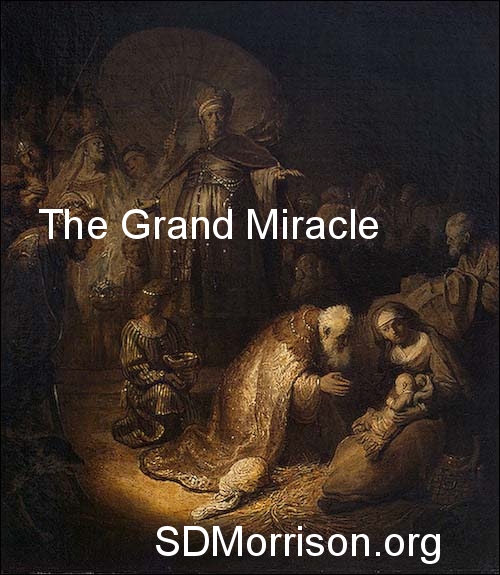 Have you ever read a book just for the sake of a single chapter?

That’s exactly what I’ve done in reading C.S. Lewis’ Miracles this week. Now the rest of the book was good, but not really what I cared to read about. Of course it is C.S. Lewis, which means it’s brilliant and well thought out, however, just not interesting to me personally. I was far more interested in chapter 14, entitled “The Grand Miracle.” Thankfully it didn’t disappoint.

I do recommend this book for anyone who is interested in C.S. Lewis’ take on naturalism vs. supernaturalism and the overall existence and probability of miracles. I read it because I wanted to hear what C.S. Lewis has to say about the incarnation, which he calls, “The Grand Miracle.” Here are three ideas I’ve taken from this chapter.

C.S. Lewis begins by saying “The central miracle asserted by Christians is the incarnation” and that “if the thing [incarnation] happened, is was the central event in the history of the Earth- the very thing the whole story has been about.” (Pg.108)

The Incarnation is a fascinating study, and one that I believe is far too often over looked in western Christianity. Historically this is not the case, and you can see here that with C.S. Lewis this was also not the case. He saw, as Athanasius saw, that the incarnation is not just a footnote to the cross, but rather a cornerstone to the whole saving work of Christ.

In the Christian story God descends to re-ascend. .. He goes down to come up again and bring the whole ruined world up with Him. One has the picture of a strong man stooping lower and lower to get Himself underneath some great complicated burden. He must stoop in order to lift, He must almost disappear under the load before He incredibly straightens His back and marches off with the whole mass swaying on His shoulders. (Pg. 111) He continues to compare the incarnation with the cadence of nature, which is death and resurrection. When corn is planted it goes into the heart of the earth, and there it dies. But it’s death is only for the purpose of the new life that springs up from it. Therefore, Christ descends into the earth, into the very existence of humanity, and there He bows low in order to raise up with Him a whole new world.

The incarnation is stunning because when Christ comes He comes to bring us home. He comes to find us like the lost sheep, and to carry us on His shoulders and return us to the place where we belong: the presence of His father, and the delight of His heart.

He is the corn king who comes to die, to raise, and to create a whole new world within His life. The incarnation is stunning because the incarnation is the truth of a God who stoops low to save humanity and to carry the whole ruined world up with Him.

The Incarnation of Christ, His life, His death, and His resurrection is not the work of some superman God who came to show off. This work is a vicarious work of God, both for us, as us, and with us all.

Christ did not come as superman, He came as Clark Kent. He came as us, as a human being. What He does He does as a human being: as us, for us, and with us. This vicarious nature of Christ is why Paul writes that we are saved “by His life” (Romans 5:10) It’s not just what He has done, but rather it is who He is. The Gospel is first and foremost a person!

And certainly we have here come to a principle very deep-rooted in Christianity: what may be called the principle of vicariousness. The Sinless Man suffers for the sinful, and, in their degree, all good men for bad men. (Pg. 118)

But once the Son of God, drawn hither not by our merits but by our unworthiness, has put on human nature, then our species (whatever it may have been before) does become in one sense the central fact in all nature: our species, rising after its long descent, will drag all nature up with it because in our species the Lord of Nature is now included. (Pg. 122)

For God is not merely mending, not simply restoring the status quo. Redeemed humanity is to be something more glorious than unfallen humanity would have ever been, more glorious than any unfallen race now is (if at this moment the night sky conceals any such). The greater the sin, the greater the mercy: the deeper the death the brighter the rebirth. And this super-added glory will, with true vicariousness, exalt all creatures and those who have never fallen will thus bless Adam’s fall. (Pg. 123)

This doctrine of a universal redemption spreading outwards from the redemption of man, mythological as it will seem to modern minds, is in reality far more philosophical than any theory which holds that God, having once entered Nature, should leave her, and leave her substantially unchanged, or that the glorification of one creature could be realized without the glorification of the whole system. (Pg. 123)

Because vicariousness is the very idiom of the reality He has created, His death can become ours. (Pg. 130) The vicarious humanity of Christ (to borrow a phrase from J.B. Torrance) is a central truth to the whole Gospel. Without it, there is no salvation, nor is there any hope for humanity. Without the vicarious humanity of Christ, we are left to finish the work ourselves. Christ may have theoretically done it, but practically we are still divided from Him. However, if He truly has reached us, if He truly has become one of us, then we truly are saved because He has finished the work.

The Gospel does not start with Christ dying, it starts the moment He came to the earth in the Incarnation. Because in that moment, fallen and corrupted humanity was reached. He became bone of our bone and flesh of our flesh, therefore reaching into our very existence in order to bring us home to Himself. That’s good news! God has reached our existence in the incarnation. He has taken hold of our nature, and in His life He has recreated our existence.

May you marvel at the Incarnation and the vicarious nature of Christ. He has come, and in His coming He has rescued humanity from the fall of Adam!

Recommended reading (for more on the incarnation):