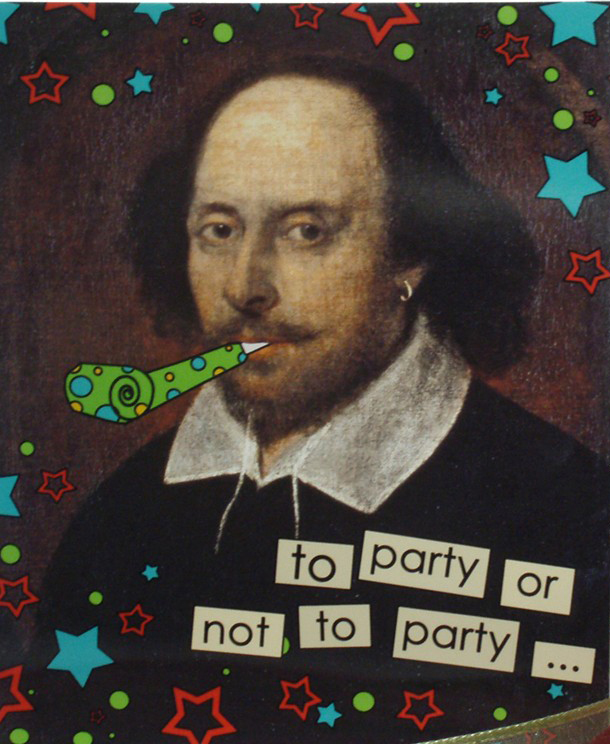 Today around the world literary fans are celebrating the birthday of the most loved and most influential writer who ever lived: William Shakespeare! Today commemorates the great bard’s death (April 23rd), exactly 400 years ago, and it is also the celebration of his birth, 452 years ago! (No one knows the exact date in April of his birth, so it’s generally celebrated along with his death.)

Shakespeare shows up quite a lot in my fiction book, No. 1. In it, there are two intermission sections which parody his work, but more than that, the entire book is full of allusions to quotes from Shakespeare. On the first page you read: “Murphy was bern in a Tuesday mourning. Ask. He’ll tell. He remembers vividly. Like it was tomourow and tomorrow and tomorgen.” Among other things, this is an illusion to one of my favorite Shakespeare passages in Macbeth: “Tomorrow and tomorrow and tomorrow.” (See below.) Various other quotes are found all throughout the book.

I am especially fond of Macbeth, when it comes to the Shakespeare cannon, even over Hamlet which is often the more popular of his plays. And so in celebration of Shakespeare today here is my favorite line from my favorite play! Enjoy!

To-morrow, and to-morrow, and to-morrow,
Creeps in this petty pace from day to day,
To the last syllable of recorded time;
And all our yesterdays have lighted fools
The way to dusty death. Out, out, brief candle!
Life’s but a walking shadow, a poor player,
That struts and frets his hour upon the stage,
And then is heard no more. It is a tale
Told by an idiot, full of sound and fury,
Signifying nothing.

What’s your favorite line or play from Shakespeare? I’d love to know, leave me a comment!