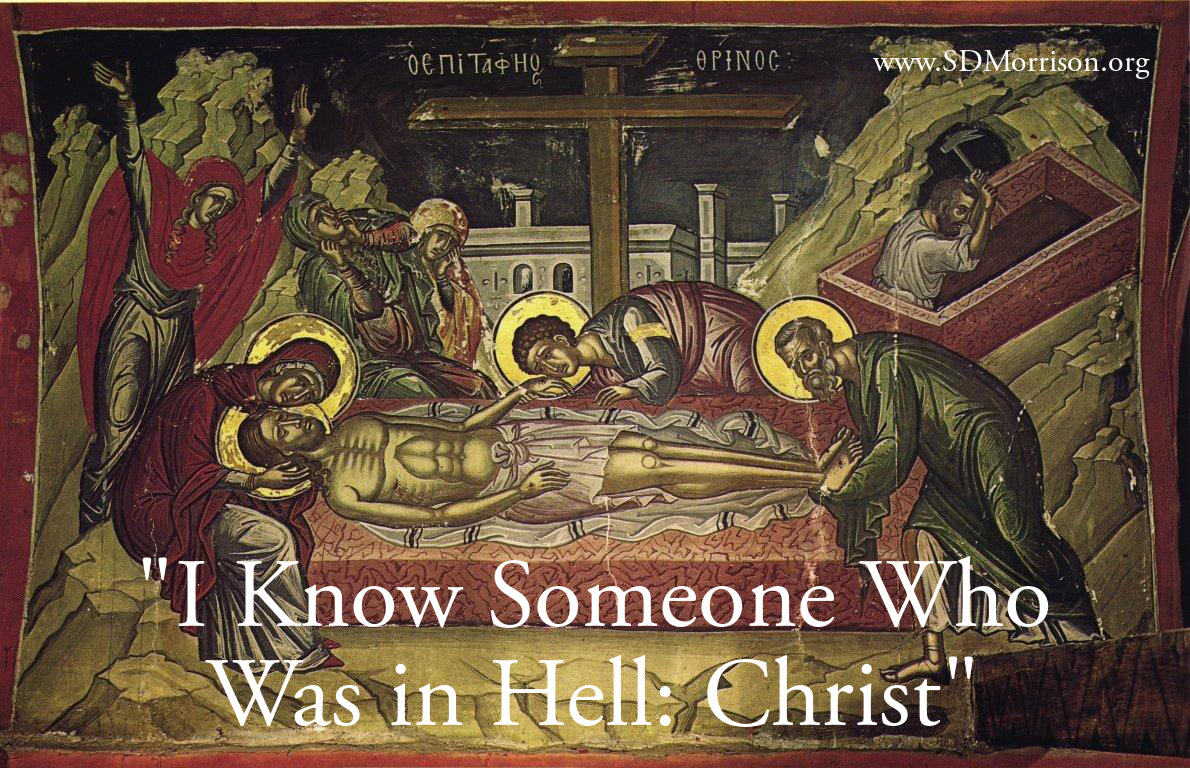 Holy Saturday, especially in protestant churches, is a deeply under appreciated part of the Easter story. In recent years, though, as I’ve meditated more on what it means, I’ve become convinced that Holy Saturday is just as essential to the gospel as Good Friday and Easter Sunday. Let me explain why.

Holy Saturday is the day in which Christ was buried in the grave, and descended to hell (as the Apostles Creed proclaims. “He suffered under Pontius Pilate, was crucified, died, and was buried; he descended to hell. The third day he rose again from the dead.”) The significance of this day is brought out, at least for me personally, most of all in the works of Jürgen Moltmann. For Moltmann, Christ’s descent to hell is a further movement of His solidarity with mankind. As on the cross Jesus suffered our forsakenness and our death, so too in the grave Jesus suffered our hell. He went so far as our God acting for us that He not only overcame our sin and death, but our hell too. Jesus has bankrupted hell, robbing it of any power it once had over mankind. He has defeated the grave.  Truly, we can say with Paul: “Death where is your sting? Grave where is your victory?”

Here Moltmann writes in Jesus Christ for Today’s World on this descent to hell:

“Is there a hell?

Yes, I believe there is a hell. In the horrors of Auschwitz and in the terrors of Vietnam, people experienced a hell of suffering and a hell of guilt. That is why we talk about the hell of Auschwitz and the hell of Vietnam, meaning a senseless suffering with no way out, an unforgivable guilt and a fathomless abandonment by God and human beings. Is there a hell after death too? I believe there is, for the hell before death is worse than death itself. For many people death was a release from the suffering and fear of that hell.

Do we know anyone who is in hell? Would we tell a mother weeping at her son’s grave that her son is in hell because he never found faith while he was alive? We should respond to the first question with an embarrassed silence. And we would not answer ‘yes’ to the second one either. But I know someone who was in hell: it is Jesus Christ, who the creed says ‘descended into hell’.

When we were thinking about the tortured Christ, we asked: what does this article in the creed mean? When did Christ go through hell? And we saw that in the past two answers have been given. The earlier interpretation said that after his death Christ descended to the realm of the dead, to preach to them the gospel of their redemption and to deliver them. Luther looked at it differently, maintaining that Christ endured the torments of hell between Gethsemane and Golgotha, in his profound forsakenness by God. But whatever we may think about Christ’s descent into hell, Luther was right when he said: ‘Regard not hell and the eternity of torment in thyself, nor these things in themselves, nor yet in those who are damned. Look upon the face of Christ, who for thy sake descended into hell and was forsaken by God as one who is damned eternally, as he said on the cross: “My God, why hast thou forsaken me?” See, in him thy hell is vanquished …’ Because Christ was in hell and endured its torments, there is hope in hell for redemption. Because Christ was raised to life from hell, hell’s gates are open and its walls have been broken down. Though I make my bed in hell, you are there.’ And then hell is not hell any longer. ‘O hell where is thy victory? But thanks be to God, who gives us the victory through our Lord Jesus Christ? (1 Cor. 15:55, 57).” 1

Hell is overcome by Christ. Whatever else we have to say about hell, it’s duration or existence or who goes there—we can say for certain this: hell is overcome. And we only know with certainty of one who has been there: Jesus Christ. This means that even in hell, there is hope. Because even in hell there is Jesus Christ the reconciler of the world, the redeemer of mankind, the friend of sinners.

This does not, of course, automatically equate to universalism. As Karl Barth has said about the subject, “I don’t teach universal reconciliation but I don’t not-teach it.” Because in the end the question of universalism is not something we can answer. Instead, it will only be answered by God. As Jürgen Moltmann has also said, “Does the new creation of all things mean ‘universal reconciliation’ and ‘the restoration of all things’? This is a difficult question, because only God will answer it. If we think humanistically and universally—God could perhaps be a particularist. But if we think pietistically and particularistically—God might be a universalist. If I examine myself seriously, I find that I have to say: I myself am not a universalist, but God may be one.” 2

(For more see further my book We Belong: Trinitarian Good News appendix B, along with Dare We Hope That All Men Be Saved? by Hans Urs von Balthasar.)