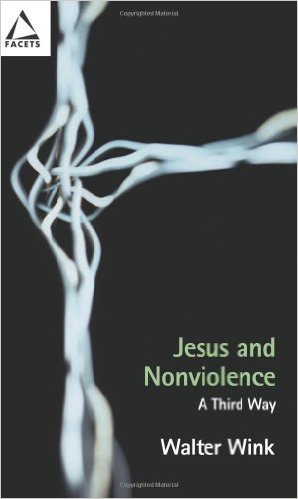 I had the pleasure of reading Walter Wink’s short book Jesus and Nonviolence: A Third Way this weekend. It is on sale as a part of the Fortress Press eBook sale for only $3.99, so I figured it’s worth giving a try. I’ve heard of Walter Wink before, but this was my first time reading anything particular by him.

Since reading Brian Zahnd’s brilliant book A Farewell to Mars I’ve taken interest in the topic of nonviolence as an agent for social change. And Wink’s book, as I’ve now discovered, is a classic on the topic. I enjoyed reading it and found it to be refreshing.

The book is important in helping clarify, at least for me, the way nonviolence actually works. Brian Zahnd’s book was excellent in showing why violence is a problem (especially in America), but only briefly hinted towards a way forward. Walter Wink picks up almost immediately where Zahnd left off. He writes to show what nonviolence actually looks like and perhaps most importantly what it does not look like. It is not passive action, or neutrality. It is sometimes fierce and critical as an act of militant resistance. He shows, through the teachings of Jesus, what this “third way” is (Jesus’ way compared to passivity or violence).

I also really enjoyed how Wink uses an abundance of stories from around the world to show when nonviolence worked. He draws a lot from Martin Luther King Jr., but also from many other nonviolent revolutions from South America, Europe, India, and Africa.

The book definitely got me thinking more about nonviolence as a realistic means of social change. It helped me understand the particular way in which Jesus presented nonviolence. We often misunderstand him to be teaching a passive response, when in fact his third way was an active, though nonviolence, form of resistance.

I recommend this book to anyone interested in nonviolence. Especially if you think of nonviolence only as nice theory but an ineffective one in practice. This book proves quite well that nonviolence is the way forward for humanity and our movement away from injustice.

To give you a preview of the book, here are a few quotes I enjoyed:

Jesus did not tell his oppressed hearers not to resist evil. That would be absurd… A proper translation of Jesus’ teaching would then be, “Don’t strike back at evil (or, one who has done you evil) in kind.” “Do not retaliate against violence with violence.” The Scholars Version is brilliant: “Don’t react violently against the one who is evil.” Jesus was no less committed to opposing evil than the anti-Roman resistance fighters. The only difference was over the means to be used: how one should fight evil. There are three general responses to evil: (1) passivity, (2) violent opposition, and (3) the third way of militant nonviolence articulated by Jesus. 1

Jesus abhors both passivity and violence as responses to evil. 2

Loving confrontation can free both the oppressed from docility and the oppressor from sin. 3

Once we determine that Jesus’ Third Way in not a perfectionistic avoidance of violence but a creative struggle to restore the humanity of all parties in a dispute, the legalism that has surrounded this issue becomes unnecessary. 4

Love of enemies is the recognition that the enemy, too, is a child of God. 5

We identify someone else as evil and unconsciously project our own evil onto that person. 6

To be very frank with you, I don’t think that violence is Christian. Some may say that this is a reactionary position. But I think that the very essence of Christianity is the cross. It is through the cross that we will change. 7