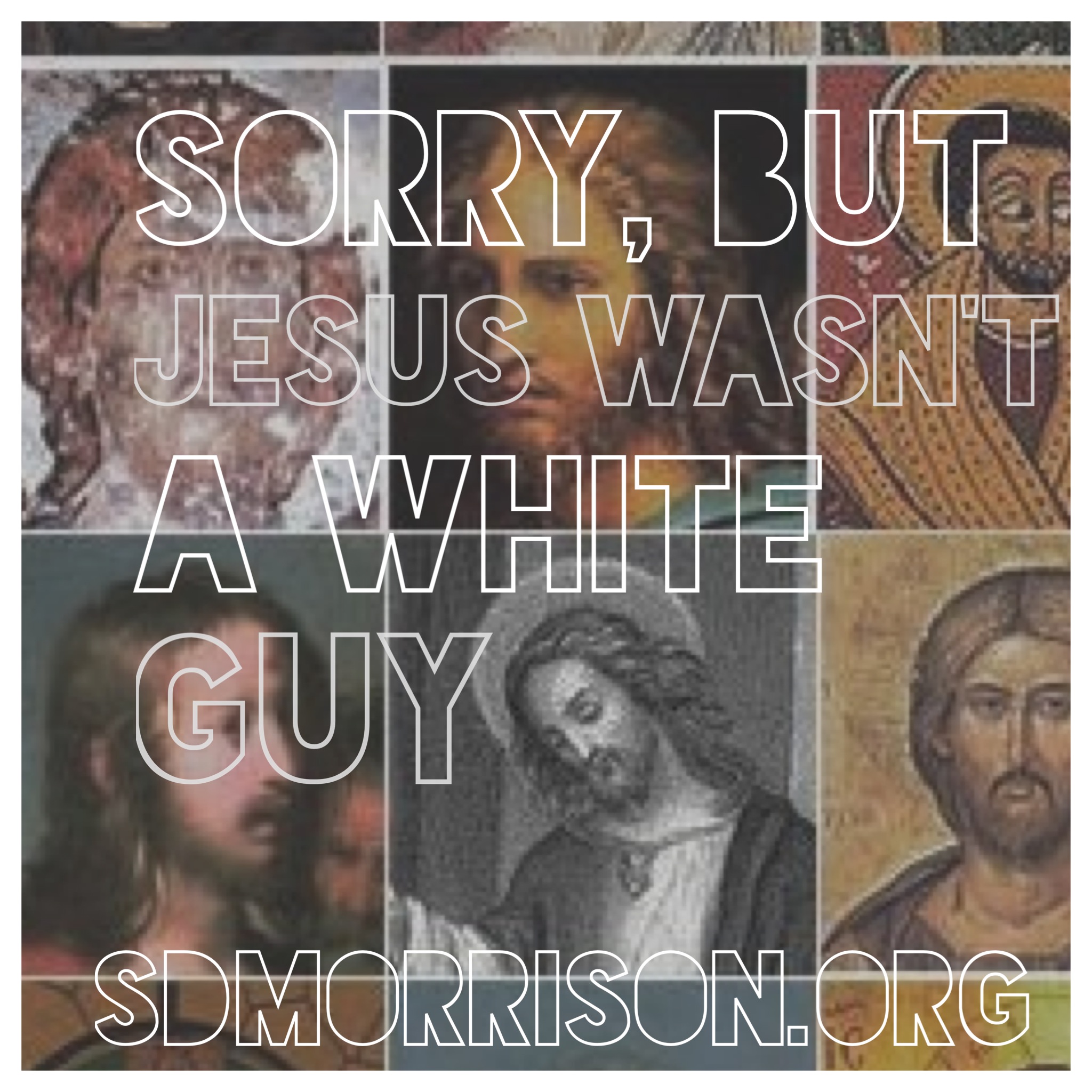 “The scholarly consensus is actually that Jesus was, like most first-century Jews, probably a dark-skinned man.” (Source)

Sorry Charlie, but Jesus wasn’t a white guy from Utah. He wasn’t an American individualist. He came from the middle eastern country of Israel, as a Jew. He most likely had brown skin, spoke Aramaic , and if you saw Him in the airport, you might take a second look.

Aramaic is a semitic language of Arabic, which means the two languages sound alike. Most Americans would feel slightly anxious if they heard it spoken on an airplane. (Which is not to say there’s anything wrong with Arabic, but that the American perspective of the language has been skewed due to 9/11.)

But does it really matter what color Jesus’ skin was? Not really. It’s irrelevant to be honest.

But it does matter when we westernize Jesus and create Him in our cultural image. When we divorce the person of Jesus from the historical backdrop of ancient Israel, we run the risk of misunderstanding the gospel entirely. Ancient Israel, the Jewish people, and the eastern culture that Jesus comes to is the only context in which we can properly understand the gospel.

As T.F. Torrance writes, “To detach Jesus from Israel or the Incarnation from its deep roots in the covenant partnership of God with Israel would be a fatal mistake.” (The Mediation of Christ, page 23.) My fear, and Torrance’s fear, is that we have “gentilized” Jesus, and thus removed Him from the backdrop of Israel’s history with God. The proper context for who Jesus is, is the history of Israel, and the cultural mindset of the people. We can’t separate Jesus from the history and culture of Israel, because Israel is the context in which God’s self-revelation is actualized in the life of Jesus.

Think about it like this. When God decided to come to the earth, and when He decided to revel Himself to humanity as a whole, He didn’t come as a Greek, or a Roman, or as an American. He trusted the self-revelation of His nature in Jesus only to the Jewish people. He actualized His revelation within their mindset, and their culture.

For whatever reason, God chose that Israel would be the backdrop for His self-revelation in Jesus. Israel is the canvas for the gospel. Therefore, to divorce the person of Jesus Christ, and His work on the cross from the backdrop of Israel is to ultimately misunderstand both.

I believe Christianity has been hijacked by Western ways of thinking, and Western perceptions of God. We have interpreted the nature of God on our terms instead of on His. His terms are the culture, and context of Israel, not any other culture or nation.

There is much that can be said about the differences in western and eastern culture and mindsets. However, here are three areas where I feel we often misunderstand God and the Gospel because of our western lens:

Western mindset: Focused on the individual, on intellect, and on legal structures.

Eastern mindset: Focused on the community, on mystery, and on priestly structures. (Especially in Jewish culture)

These cultural focus differences have, I believe, caused us to misinterpret the gospel.

Due to the influence of western thought, which is rooted in both Roman, and Greek cultures, our theology has been developed by these cultural distinctions. I believe that we have taken Christianity and made it far too individualistic, intellectualistic, and legalized.

Because this is such a massive topic, hardly one that I can fully express in a 1,500 word post, I will focus in on these three areas and on how I feel they have influenced our understanding of the Gospel.

One of the most striking effects that our western thinking has had on Christianity is the legalization of the Gospel. Due to Roman ideas of law and order, we have made the Gospel a message of judicial satisfaction instead of properly understanding the Gospel as a priestly and mediatory announcement.

Jesus did not come to fulfill some abstract legal requirement from God. He did not come to die in our place, standing before a justice-driven judge hell bent on punishing us. God the Father is not a blood thirsty deity that needed appeasing.

The Gospel is not a court case, it is a love affair! We have misunderstood the Apostle Paul, and we have turned the Gospel into a court case where God settles His legal issues with humanity. This idea is often referred to as Penal Substitutionary Atonement. Which is simply a theory of atonement that says Father God has wrath that must be satisfied, and therefore Jesus stands in and takes that wrath for us. Jesus get’s punished (Penal) in our place (Substitution) in order to satisfy a legal requirement of God.

But this is a disastrous error. The cross doesn’t condition God into being gracious towards us. That flips the whole gospel on it’s head! Making the cross change God, instead of changing us. If the Gospel is about satisfying God, then the reason for Jesus’ death was to fix God, not to fix us.

But the Gospel is not the news of how Jesus has fixed God. The Gospel is the announcement of how He has fixed us, and freed us from the slavery of sin! The cross changed us, not God. Jesus didn’t die in order to twist God’s arm, and make Him forgive you.

The cross is about love, not law!

We have failed to see that Jesus was acting not as a legal replacement for humanity, but rather as a priestly and mediatory substitute for humanity! The former is rooted in western law and order, while the later is rooted in the Jewish temple. Jesus came as the high priest, and the mediator between God and man. He did not come to fulfill some legal duty before an angry judge. He came to perform a priestly and mediatory work!

Penal Substitutionary Atonement is a western idea that has hijacked the Gospel. It is rooted in Roman ideas of law and order, instead of the Jewish concept of priest and mediator.

Additionally, another way in which the gospel has been hijacked by western thought is through the over-intellectualization of it’s mystery. Simply put, we haves sought to removed all traces of mystery, and unknowing from the Gospel. Due to the western focus on intellectual understanding, any gospel idea that is mystical or supernatural is often intellectualized out of mystery.

For example. The Gospel announces the absolutely beautiful reality and mystery of our union with Christ. Paul calls it “the mystery of the ages” which is “Christ in you.” (Colossians 1:25-27)

Our mystical union with Christ is one of my favorite gospel realities. The utter nearness of God, and oneness of our spirit with His, is what makes the Gospel good news! However, this reality is far to often underemphasized in western Christianity because it intellectually makes little sense. But this reality remains mysterious and supernatural. It can not be solely intellectually understood. Mystery belongs in the Gospel, and our western intellect should be held back from trying to remove it.

The final distinction that remains between western and eastern understandings of the Gospel, is that of community vs individual. In eastern societies, the community, the “we”, is greater than the individual “I.” We have taken our western lone-ranger ideas, and plastered them onto the Gospel. Making the emphasis on our individual decision, or our individual relationships with God. However, the Gospel is a corporate message. It is universal in it’s scope, effecting the whole world. Jesus died for the whole world, not just the individual.

Karl Barth once said that Theology is best worked out within community. We need one another’s perception and ways of thinking to understand God and life. My relationship with God is very personal, but it should also be corporate. We are all on a journey together, and I am on a journey personally. Both ideas are important to remember. Jewish was a Jew, but does this mean that God is Jewish? No. Instead of defining God by our terms, we should see that God is expressing Himself through our terms. When Jesus came as a Jew, it wasn’t because God is a Jewish person. Rather, God chose Israel and entrusted it with His self-revelation. Jewish culture is the language God has chosen to express Himself in.

This is why we need to learn how to speak the language that God is speaking. We need to see that Jesus came within the context, the language so the speak, of the Jewish people. Instead of westernizing Jesus, we should learn how to understand Jesus on His terms by understanding the culture He came to.

Jesus was not a white guy. His culture, and His ways of thinking are foreign to us. In order to understand Him properly we must see Him through a Jewish mindset, not a western one.