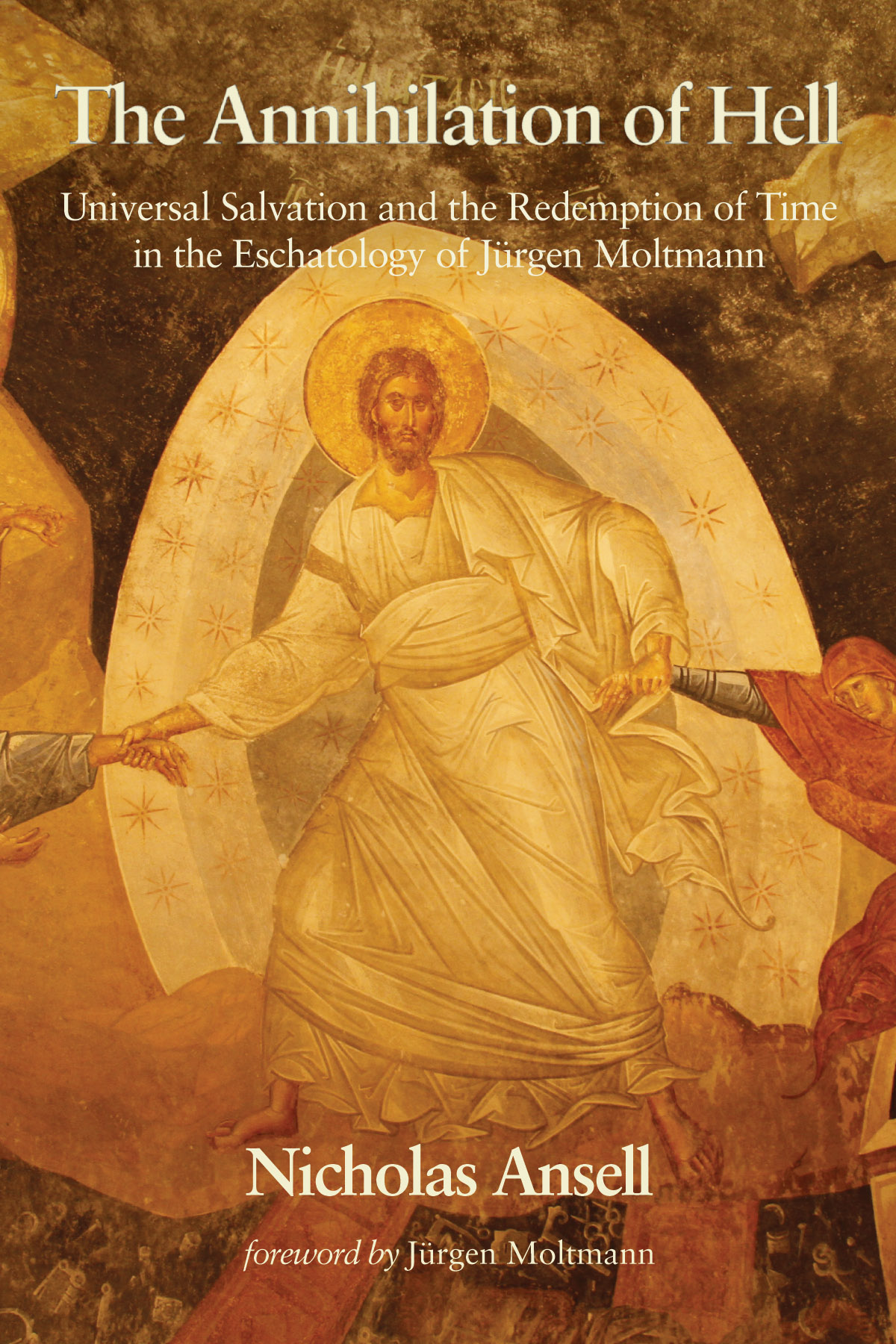 Book: The Annihilation of Hell: Universal Salvation and the Redemption of Time in the Eschatology of Jürgen Moltmann by Nicholas Ansell (2013). (Amazon link)

Publisher: Cascade Books, an imprint of Wipf and Stock Publishers.

Jürgen Moltmann is one of my favorite theologians, and so I was delighted to have the opportunity to read and review Nicholas Ansell’s book The Annihilation of Hell from the kind people at Wipf and Stock publishers. Thank you!

This book is a sympathetic engagement with Moltmann’s eschatology, specifically focusing on universal salvation and the nature of time in Moltmann’s theology. Generally speaking, I greatly enjoyed reading this book and appreciate the tremendous effort Ansell has put forward in it. I recommend it to anyone interested in the theology of Jürgen Moltmann, especially in how it pertains to universalism.

Ansell presents an overview of his work in a summary at the end of the book. He writes,

This study is an engagement with the theme of universal salvation as viewed within the overall structure of Moltmann’s theology, eschatology, and theocosmogony. Consonant with Moltmann’s understanding, the main title, The Annihilation of Hell, refers to the overcoming of Hell as our eschatological hopes are realised, whilst at the same time alluding to Hell’s own annihilative power in history—a power with which hope must contend. For Moltmann, Hell is the nemesis of hope. Yet hope clings to the certainty that God in Christ has embraced all things, even death and Hell, so that creation may participate in the divine Life of the Age to Come. (P. 424)

Prior to this remark, Ansell gives an overview of his general critique of Moltmann’s position.

Ansell argues quite well in this book that Moltmann’s universalism of hope and of the cross is a commendable one, but he is critical of his theocosmology. Particularly, he is critical of how Moltmann seems to blur the line between creation and fall in his usage of zimzum, and in turn of his negative assessment of creation (and thus of time). Ansell proposes a way forward which I find insightful and constructive. He spends a great deal of time in the book dealing with the nature of time. It may very well be time well spent (see what I did there?), but I was less interested in this section than in his overall affirmation of Moltmann’s universalism.

In this review, as the title suggests, I want to focus on what Ansell says positively about Moltmann’s universalism. Because, frankly, most of what Ansell had to say negatively about Moltmann’s theocosmology  I had not picked up on in my reading of his work. Most of his insights were great in this regard: that I felt as if I was learning a new way of reading Moltmann. This is the most notable factor of his carefully nuanced critique. (And from this I am challenged that I need to read Moltmann again, and perhaps more carefully!) But obviously this also means I would have difficulty engaging with Ansell’s criticism of these ideas. Though I do commend his work and think he is certainly right about much of his critique.

(And it is generally a constructive critique, as Ansell offers many helpful alternatives which he feels strengthen Moltmann’s universalism. I’m just not as well versed in the philosophy of time as Ansell is.)

For Moltmann, universal salvation is not a dogmatic assertion, but it is a certain hope. (I’ve written more on this here.) It is a certain hope not because of theological deduction, but because of what God has done in Jesus Christ, specifically because of what has taken place in His death and descent into hell. For Moltmann, then, universalism is best argued from the standpoint of the crucified Christ. Moltmann writes in his famous work, The Crucified God, that “the theology of the cross is the true Christian universalism.”

For Moltmann, the basis of universal salvation is the cross of Jesus Christ, who was buried and descended into hell. In this way God may truly become “all in all”, because even in hell there is hope because there is the presence of Christ.

For this reason, Ansell calls Moltmann’s universalism “pre-theological”. He writes what follows, summarizing the difference between a dogmatic universalism and a merely hopeful one (apart from the substance of the cross):

A universalism of hope, I was thereby suggesting, is neither a dogma nor a ‘nice idea’. Those who, in looking forward to God’s final victory over evil, find themselves looking forward in hope and confidence to a ‘universal’ salvation are convinced of something that others cannot be convinced of unless—or until—they come to share in that hope. In my view, a conviction of this kind, which is pre-theological and pre- doctrinal in character, is legitimate—at least in principle—even if those who hold to it cannot justify it theologically. Moltmann himself captures this pre-theoretical confidence well when he describes his own position as “a universalism of hope which is not a doctrine . . . but is a presupposition.” This is a hope I share and a ‘universalism’ I accept. (P. 211)

That in the end all will be redeemed is not the theological doctrine Moltmann claims, but rather it is his theological presupposition. As I’ve written elsewhere, for Moltmann the fact that Christ has descend into hell means hope  for the redemption of all creation. The famous warning over Dante’s Inferno, “Abandon all hope…”, is deemed null and void in the light of Christ’s cross and descent into hell. Because if even in hell there is hope, we can presuppose that in the end all will be saved. This is not because we think God should or must do this, but because of what God has done in Jesus Christ and His cross we can presuppose this as the ultimate goal of redemption.

Moltmann’s universalism, therefore, is deeply connected with the whole of his theological project, which is centered upon the sufferings of Jesus Christ on the cross. Hope for the universal salvation of the cosmos is affirmed, according to Moltmann, on the cross.

Beyond this focus, Ansell also shows how Moltmann navigates the two major arguments often spoken against universalism. First, that it negates the freedom of mankind, and second, that it negates the freedom of God. Dogmatic universalism perhaps does this, but Moltmann’s universalism of the cross is not stuck in this same position. Dogmatic universalism is often plagued with a sort of determinism, in which ultimately all will be saved because God “must” save and we “must” be saved. The problems of this position are address well and their relation to Moltmann’s position are very insightful. It is one of my favorite aspects of this book, that Ansell strives most of all to engage Moltmann with the contemporary theology of both the Arminian and Calvinist positions. Moltmann’s universalism of the cross untangles itself from this dual problem of freedom in an admirable way. Thus, Ansell seems to conclude that Moltmann’s universalism, with some alterations, is one which the Christian community at large might engage and possibly accept as viable.

Ansell’s book is an excellent and nuanced study on Moltmann’s eschatology and his universalism of the cross. I look forward to further work from Ansell, as he wrote in a clear yet erudite manner. This book is approachable for most informed readers, though I do recommend, if you’re interested in reading it, that you have at least a basic understanding of Moltmann’s theology beforehand. (It’s especially helpful if you’ve read God in Creation, The Coming of God, and Theology of Hope.)

You can buy the book here from Amazon or directly from the publisher.