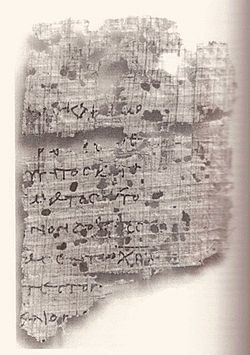 Biblical scholars are divided over the authorship of Ephesians and Colossians. Unlike other books like Romans or 1 and 2 Corinthians which are undisputedly Pauline, it has been debated whether Ephesians and Colossians (along with 2 Thes., 1&2 Tim., and Titus) are actually Paul’s authentic letters. It was common in Paul’s day to write a letter and put the name of a respected figure on it instead of your own, so the possibility is certainly there that someone else may have written these letters.

There are many arguments for or against this, but for the moment I am not interested in exploring all of them or presenting my own case. I have been reading the PhD thesis paper of Ross Wright, which contains, among an analysis of the work, a translation of Karl Barth’s 1921-1922 lectures given in Göttingen on the book of Ephesians. I was interested in reading Markus Barth, Karl Barth’s son and a well-respected NT scholar in his own right, who’s also written about Ephesians here, when a friend from the Karl Barth Discussion Group on Facebook pointed out this paper. (Thanks John!)

There are many points of interest in these lectures, as Wright has pointed out, especially in regards to the early-Barth and mature-Barth. But today I want to quote Barth’s own (brief) and insightful comments on this debate. Barth affirms the authorship of Ephesians, and Colossians with it, as Pauline, but he ultimately points out that it matters very little to him either way.

Barth presents an internal argument for this, which means he examines the texts and compares them with other undisputed letters to answer the question of authenticity. Essentially, Barth finds no problem with the differences of language and of emphasis from what would be an early-Paul and a late-Paul (if these are authentically Pauline). Just as other great writers (ironically, including Barth himself!) had periods of early and late thought, so Paul may have had this kind of transition. So we cannot maintain that because the letters are different in language and emphasis this automatically discredits them from being Pauline, just as we could not say that the same Barth who wrote Romans ed. 1 could not have also written CD IV.1!

But ultimately Barth comes to this conclusion (bold is mine for emphasis):

“Personally, I would defend the authenticity of Ephesians. But frankly, I do not have any great interest in the question. As far as I am concerned, it could be otherwise. […] Bengel expresses my true opinion about it when he says, ‘Noli quaerere quis scripserit sed quid scriptum est.’ [‘Do not ask, Who wrote it? but, What is written?’] Now that we have dealt with this second unavoidable introductory question, we can happily devote ourselves entirely to ‘quod scriptum est.’ [What is written.] As for the authorship question, it is enough to know that someone, at any rate, wrote Ephesians (why not Paul?), 30 to 60 years after Christ’s death (hardly any later than that, since it is attested by Ignatius, Polycarp, and Justin), someone who understood Paul well and developed the apostle’s ideas with conspicuous loyalty as well as originality.” (P. 6)

I’m not sure whether or not this is an insight which Barth maintained throughout his career, but maybe someone who knows for sure would be kind enough to tell me in a comment. But either way, this is a fascinating paper so far. A big thanks goes to Ross Wright for translating these lectures, they are very interesting! (Read them for yourself here.) More articles may come as I continue reading through them, as well as Wright’s analysis of the text.