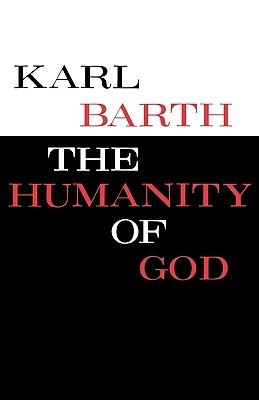 Karl Barth’s The Humanity of God was one of his first books I read. I loved it, but in retrospect I probably understood very little of it. So today I decided to read it once again, and since it’s a rather short book I’ve nearly read it all in one sitting! I’m reminded of all the reasons why I love the theology of Karl Barth as I read: not that Barth himself is the focus, but that I find myself time and time again drawn to worship God! That, for me, is the ultimate test for what “good” theology actually is.

I wanted to share a notable section from the book, probably it’s central part. It’s a rather long quote, followed by several shorter quotes to drive the point home and clarify what Barth is getting out. Here Barth is arguing what he refers to as the “humanity” of God, a rather difficult concept for those unfamiliar with Barth. But what he means by this is something I will simply let him explain for himself, though its worth noting how this is a development upon what Barth argues in CD IV/1 on the condescension of God in Jesus Christ and the exaltation of man in Jesus Christ (§59.1, “The Way of the Son of God into the Far Country”). If you’re looking for even further clarity into what Barth means, go read that section. It’s a revolutionary concept well worth taking the time to understand.

But without further ado, please enjoy! Bold text is mine for emphasis; italics are in the original.

(As a quick side-note: The Humanity of God is July’s free book of the month, which I always send to my Readers Group on the first of every month. When you’re a subscriber, every month you get a great free book, plus you get my book right away—Where Was God, a short and approachable introduction Moltmann’s theodicy! Don’t miss out! Sign up here.)

“Who God is and what He is in His deity He proves and reveals not in a vacuum as a divine being-for-Himself, but, precisely and authentically in the fact that He exists, speaks, and acts as the partner of man, though of course as the absolutely superior partner. He who does that is the living God. And the freedom in which He does that is His deity. It is the deity which as such also has the character of humanity. In this and only in this form was—and still is—our view of the deity of God to be set in opposition to that earlier theology. There must be positive acceptance and not unconsidered rejection of the elements of truth, which one cannot possibly deny to it even if one sees all its weaknesses. It is precisely God’ deity which, rightly understood, includes his humanity.

“How do we come to know that? What permits and requires this statement? It is a Christological statement, or rather one grounded in and to be unfolded from Chrstology. […] In Jesus Christ, as He is attested in Holy Scripture, we are not dealing with man in the abstract: not with the man who is able with his modicum of religion and religious morality to be sufficient unto himself without God and thus himself to be God. But neither are we dealing with God in the abstract: not with one who in His deity exists only separated from man, distant and strange and thus non-human if no indeed an inhuman God. In Jesus Christ there is no isolation of man from God or of God from man. Rather, in Him we encounter the history, the dialogue, in which God and man meet together and are together, the reality of the covenant mutually contracted, preserved, and fulfilled by them. Jesus Christ is in His one Person, as true God, man’s loyal partner, and as true man, God’s. He is the Lord humbled for communion with man and likewise the Servant exalted to communion with God. He is the Word spoken from the loftiest, most luminous transcendence and likewise the Word heard in the deepest, darkest immanence. He is both, without their being confused but also without their being divided; He is wholly the one and wholly the other. Thus in this oneness Jesus Christ is the Mediator, the Reconciler, between God and man. Thus He comes forward to man on behalf of God calling for and awakening faith, love, and hope, and to God on behalf of man, representing man, making satisfaction and interceding. Thus He attests and guarantees to man God’s free grace and at the same time attests and guarantees to God man’s free gratitude. Thus He establishes in His Person the justice of God vis-a-vis man and also the justice of man before God. Thus He is in His Person the covenant in its fullness, the Kingdom of heaven which is at hand, in which God speaks and man hears, God gives and man receives, God commands and man obeys, God’s glory shines in the heights and thence into the depths, and peace on earth comes to pass among men in whom He is well pleased. Moreover, exactly in this way Jesus Christ, as this mediator and Reconciler between God and man, is also the Revealer of them both. We do not need to engage in a free-ranging investigation to seek out and construct who and what God truly is, and who and what man truly is, but only to read the truth about both where it resides, namely, in the fullness of their togetherness, their covenant which proclaims itself in Jesus Christ.

“Who and what God is—this is what in particular we have to learn better and with more precision in the new change of direction in the thinking and speaking of evangelical theology, which has become necessary in the light of the earlier change. But the question must be, who and what is God in Jesus Christ, if we here today would push forward to a better answer.” 1

“In Jesus Christ man’s freedom is wholly enclosed in the freedom of God.” 2

“God’s deity is thus no prison in which He can exist only in and for Himself. […] God’s deity does not exclude, but includes His humanity.” 3

“In Him [Jesus Christ] the fact is once for all established that God does not exist without man.” 4

“In this divinely free volition and election, in this sovereign decision (the ancients said, in His decree), God is human. His free affirmation of man, His free concern for him, His free substitution for him—this is God’s humanity.” 5

“If Jesus Christ is the Word of Truth, the ‘mirror of the fatherly heart of God,’ (Luther) then Nietzsche’s statement that man is something that must be overcome is an impudent lie.” 6

“On the basis of the eternal will of God we have to think of every human being, even the oddest, most villainous or miserable, as one to whom Jesus Christ is Brother and God is Father; and we have to deal with him on this assumption.” 7