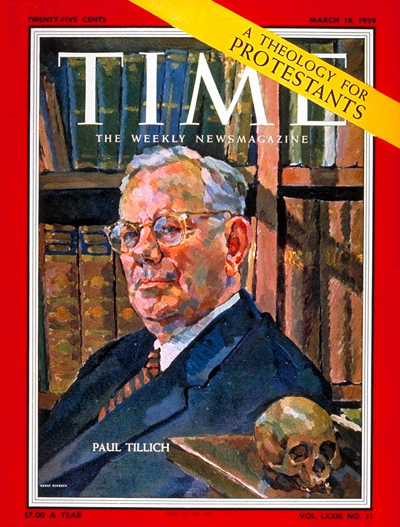 Paul Tillich is a theologian of interest for me, despite my partiality to Karl Barth. 1 Barth, Bultmann, and Tillich are often considered the three most influential names in 20th century theology (though I’d like to add TF Torrance to that list!), and so Tillich is certainly an important thinker worth reading and engaging with thoughtfully, if also critically.

Tillich interests me because I find his task commendable: to make theology, and God, relevant for the modern world. Tillich famously has said, “I hope for the day when everyone can speak again of God without embarrassment.” (Though I find his method in achieving this task less than commendable! Barth succeeds far more, in my opinion…) But I am also interested in Tillich because of his influence on modern theology. Tillich was an existentialist theologian whose insights have undoubtably helped many find the “courage to be”. But in a negative way many post-modern theologians have also drawn from Tillich’s thought, which at times borders on atheism. 2

I’ve read several of Tillich’s major books so far, including some of his sermons (The New Being), his famous Courage to Be, and his Dynamics of Faith—I enjoyed The Courage to Be the most from these. But I have yet to dive into his three volume Systematic Theology. I am holding any definitive opinions about his theology until I’ve read this, as I’d recommend anyone do with any prominent thinker: be slow to make judgements and take up the important but slow task of reading and engaging with their work.

As a part of my interest in Tillich, I do plan to read his Systematic Theology, but first I am reading an analysis by one of Karl Barth’s students, Alexander J. McKelway; a doctoral dissertation under Barth’s guidance on his theology. His book The Systematic Theology of Paul Tillich looks very promising, but so far (I only began the book today) it has been particularly interesting to read Barth’s “Introductory Report”!

In this report Barth gives his own brief thoughts on Tillich’s theology, and asks some insightful questions  of his task which show quite well the differences between these two theological giants. So without any further introduction, here are some of Barth’s comments on Paul Tillich’s Systematic Theology.

First Barth writes of the importance of engaging with a theologian thoughtfully, of not writing them off without ample and careful study.

“It was my great concern from the very beginning to restrain the students [in my classroom] from any immature or superficial critique of Tillich, and to require of them a careful examination of his underlying intention…” 3

Barth then commends McKelway in his efforts to this regard, that while he “reacts to the thought of Tillich with reservations and objections, he never simply rejects him.” 4 Saying further,

“Indeed, often enough [McKelway] expresses his appreciation for Tillich’s execution as such, for the breadth of his knowledge and interests, for the unfailing consistency of his thought, and for his great artistry which unfolds on every page. Tillich is not affirmed in this book, to be sure, but neither is he placed in some shadow; rather, he is brought to light as one who is in his own way a great theologian.“ 5

What an incredible statement coming from Barth! These two men could not be any further apart in their theologies, but here Barth shows how respectful dialogue can take place between theologians, even amongst those who so passionately disagreed with each other.

I’ll be honest, I was shocked when I read this sentence. To hear Barth call Tillich a “great theologian” in his own way will certainly surprise anyone familiar with these two individuals and their work. But Barth does not stay in these positive spirits for long (though this fact does not discredit what he has said already). From here Barth begins to look at the content of Tillich’s Systematic Theology, especially Tillich’s (in)famous method of correlation, asking insightful questions to the validity of such a theology:

“Tillich’s methodology, already revealed in the title and concept of the system, proceeds in such a way that both successively and simultaneously the philosophical concepts of reason, being, existence, life, and history are set in correlation with the theological concepts of revelation, God, Christ, Spirit, and the Kingdom of God.

“The Problematic nature of this undertaking is obvious. Since Tillich’s theological answers are not only taken from the Bible, but with equal emphasis from church history, the history of culture generally, and the history of religion—and above all, since their meaning and placement is dependent upon their relation to philosophical questions—could not these answers be taken as philosophy just as well as (or better than?) they could be taken as theology? Will these theological answer allow themselves to be pressed into this scheme without suffering harm to what in any case is their biblical content? Is man with his philosophical questions, for Tillich, not more than simply the beginning point of the development of this whole method of correlation? Is he not, in that he himself knows which questions to ask, anticipating their correctness, and therefore already in possession of the answers and their consequences? Should not the theological answers be considered as more fundamental than the philosophical questions and as essentially superior to them? If they were so considered, then the question and answer would proceed, not from a philosophically understood subject to a ‘divine’ object, but rather from a theologically understood object (as the true Subject) to the human subject, and thus from Spirit to life, and from the Kingdom of God to history. Such a procedure would not actually destroy the concept of correlation, but would probably apply to is the biblical sense of ‘covenant.’ This application, however, is unknown in Tillich.” 6

The question, “Should not the theological answers be considered as more fundamental than the philosophical questions and as essentially superior to them?”, is perhaps the most critical difference between Karl Barth and Paul Tillich. Barth begins with God and works towards man, Tillich begins with man and his philosophical questions and works towards God. For Barth, this is a complete reversal of the entire task of theology! I found this question to be perhaps the best summary of why Barth takes issue with Tillich and the major differences in their theology; and it is also, in my brief and early understanding of Tillich, why I take preliminary issue with his theology (so far as I’ve read).

But I am excited to pull out the good in Tillich’s work from his Systematic Theology with help from McKelway’s analysis (endorsed by Barth!), though soon after by directly reading his work myself! If you’re are interested in Tillich and how a so-called “Barthian” might respond to his theology, I recommend you pick up this book. Once I’ve finished it I’m planning to write up more thoughts, but for now Barth’s introduction has provided plenty of food for thought!

For anyone interested in how these two men differ, here’s my advice (which someone first suggested to me when I asked about Tillich): in order to best glen the differences between these two men, read first Tillich’s sermon “You are Accepted”, and then immediately read Barth’s “Saved by Grace”. (You can read these online here and here.) Comparing these two sermons is perhaps the best way to see immediately how they differ in the practical act of preaching, because here we have an excellent example of how each of these two theologians understood the gospel.