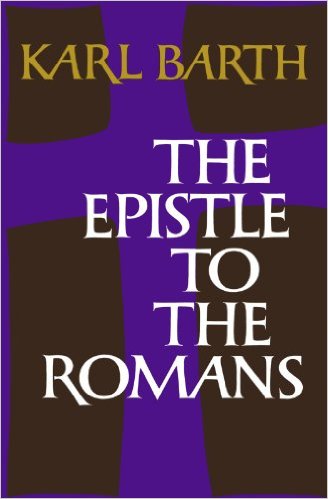 A few weeks ago I read Karl Barth’s classic The Epistle to the Romans and posted quotes to my Twitter and Facebook pages. I posted these with the hashtag #KBRomans. I had a blast doing it and seeing the responses from everyone online. Generally speaking I really enjoyed this book, although, as even Barth writes in the introduction, there are things I think were over emphasized. But it is a product of its time, and an very important one at that.

This book is one of Barth’s most well-known, though as much as I have read Barth and written much about him here, I had not read it up until now. The book launched Barth’s theological career, and is without a doubt a fascinating book. It’s one that Barth himself later moved beyond and would come to disagree with much of it, but I enjoyed it. Here I wanted to compile some of my favorites, as well as some comments on them. Enjoy!

“If I have a system, it is limited to a recognition of what Kierkegaard called the ‘infinite qualitative distinction’ between time and eternity…” (p 10)

Here’s a summary of Barth’s primary theme in Romans. Kierkegaard finds his way into the book often, and this idea of the distinction between us and God, of time and eternity, is prevalent for the entire commentary.

Here Barth is crushing natural theology with a devastating blow. When we posit God as the “highest good” of our world, as the “ultimate concern” of our humanity, we do not have the God and Father of Jesus Christ—we have ourselves situated on the throne. When we “speak of God by speaking of man with a loud voice” (Barth) we practice idolatry. We set ourselves in the place of God when God is enthroned in our world. God must be seen above our world, transcendent even in His imminence.

“‘Jesus Christ our Lord.’ This is the Gospel and the meaning of history.” (p 29)

“Only when grace is recognized to be incomprehensible is it grace.” (p 31)

Barth has several “grace is…” “faith is…” statements in Romans, but this one is just brilliant. We have a human tendency to make grace natural, but Barth reminds us that grace is always incomprehensible because it is God’s grace. Bonhoeffer called the kind of grace we give ourselves “cheap grace”. But I don’t want the kind of grace I can give myself. We can’t live by human grace. Only by the grace of God, which is mystery, miracle, and incomprehensible.

“Grace is the gift of Christ, who exposes the gulf which separates God and man, and, by exposing it, bridges it.” (p 31)

Another great “grace is…” remark. Barth has often said that grace is never without judgement, that judgement is never without grace. When God acts graciously towards us in Jesus Christ to reconcile us to Himself He at once exposes our sinful condition, He judges it, but only in the act of reconciliation. This is why Barth later develops a revolutionary doctrine of sin in the light of Jesus Christ.

“The Gospel is not a truth among other truths. Rather, it sets a question-mark against all truths. […] Anxiety concerning the victory of the Gospel—that is, Christian Apologetics—is meaningless because the Gospel is the victory by which the world is overcome.” (p 35)

This is one of the most fascinating remarks in the book. Barth rejects apologetics as an attempt to remove the impossibility of the gospel, to make grace natural. Why do we believe? We do not know, only that because we believe we believe by pure miracle, i.e., by grace.

“Our relation to God is ungodly. We suppose that we know what we are saying when we say ‘God’.”(p 44)

I like this quote. It’s another crushing attack against natural theology. If we take seriously this qualitative distinction between God and man, then our relationship with God can only be ungodly, or in Paul’s terms “unrighteous”. We do not know what “God” is. Only as God reveals Himself to us and sets us right (revelation and reconciliation) can we know who God is.

“The enterprise of setting up the ‘No-God’ [of natural theology] is avenged by its success.” (p 51)

Natural theology is avenged by its success. Those who wish to posit a God in the image of mankind suffer in their success: they are given over to a God who looks like they do. But I for one do not want a God who looks like me. Give me the God and Father of Jesus Christ or no God at all.

“God does not live by the idea of justice with which we provide Him. He is His own justice.” (p 76)

One of the most powerful things I learned from Barth in CD IV/1 is that in Jesus Christ God has taken up our cause as His own. This is how fully we belong to Him.

“[God] is the death of our death and the non-existence of our non-existence. He makes alive and calls all things into being.”

“[Adam] exists only when he is dissolved, and he is affirmed only when in Christ he is brought to nought.” (p 171)

For Barth, Adam’s fall takes place in Christ’s world, Christ’s redemption does not take place in Adam’s world. See this article for more.

“Faith is the possibility which belongs to men in God, in God Himself and only in God when all human possibilities have been exhausted.” (p 202)

“Men [and women] can apprehend their unredeemed condition only because they stand already within the realm of redemption.”

“[Men and women] know themselves to be sinners only because they are already righteous [in Christ].”

“God has justified Himself in our presence and us in His presence.” (p 150)

Barth writes in CD IV/1 that the first act of justification is God’s justification of Himself in the raising of Jesus Christ. Here he seems to echo a similar point.

“If Christianity be not altogether thoroughgoing eschatology, there remains in it no relationship whatever with Christ.” (p 314)

Barth sounding a bit Moltmannian with this one! It’s a shame Barth never completed his final volume on eschatology (the planned CD V).

“To know God means to stand in awe of Him and to be still in the presence of Him that dwells in light unapproachable.” (p 463)

And there you have it. These were just some of my favorites from Barth’s Romans, quotes that I tweeted during my #KBRomans tweeting season! Feel free to check out the rest of the quotes at the hashtag #KBRomans on Facebook or Twitter.

Which book should I do next? I’ve thought of either Barth’s CD II/1 or possibly TF Torrance’s Trinitarian Faith as two options for the next Twitter/Facebook quote session! Which do you think I should do? Let me know in a comment below! I hope you enjoyed #KBRomans.