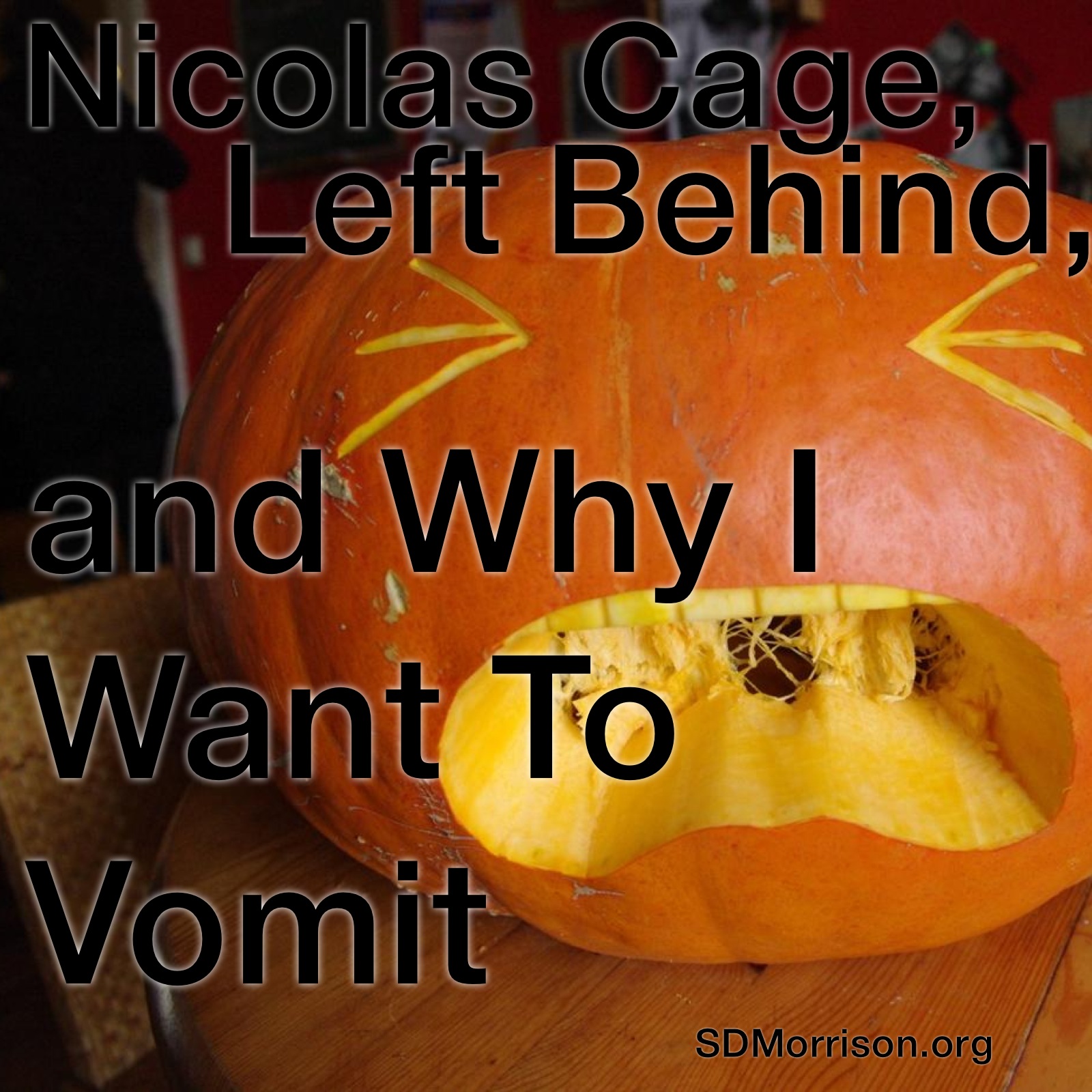 I think I’m going to be sick.

I was on Facebook today when all of a sudden I found myself watching one the most disturbing videos I’ve seen in a long time. I cringed, I cried out “oh no!”, and I just about threw up (well, not really, but I wanted to).

I watched a trailer for the new Left Behind movie staring Nicolas Cage (Wait, really?). Watch it here.

The Left Behind series presents, in my mind, one of the absolutely worst inventions of the 19th century in story form: the rapture.  1

I still find it ridiculous that anyone would believe that the rapture is a real event that will eventually take place. From a biblical standpoint, it’s wholly nonsensical and  has no evidence beyond out-of-context bible verses that “might” mean something like a rapture. 2 Yet thousands of Christians willingly believe in this, and hope that one day the rapture will actually happen.

So why in the world do we believe it today?

I believe it has a lot to do with this movie. The Left Behind series made popular the rapture theory, thereby establishing the illusion that this is truth. Since most believers don’t read the bible or study theology for themselves, they gave into what appeared to be a sensational perspective for the end times.

In a literal sense then, we have injected a hollywood doomsday obsession into the bible. We love this stuff because it’s so sensational and exciting. The Left Behind series isn’t popular because it’s good theology, it’s popular because it’s a mixture of excitement, hollywood pizzazz, and biblical literalism. Essentially, Left Behind makes the bible interesting to a generation that’s no longer interested. We’ve traded a love affair with the Gospel for a love affair with the rapture, the return of Christ, and the apocalyptic imagery of Revelation.

Don’t believe me? Go look at Amazon’s best seller list for Christian books. I guarantee you that in the top 5 there will be at least a book about the rapture, a book about heaven, or a book about hell (or a mixture of all three). 3

The rapture is just a bad idea, and so is promoting it in hollywood. Do you know how much fear something like that induces? Especially if you believe it’s not just a fictional story? I was scarred as a child imagining all the horrific events that were taught to me as fact, instead of theory. 4

We need to get honest with ourselves and stop promoting this garbage theology. The rapture is not real. Let’s get past this eschatological obsession so that we can be the hands and feet of Jesus to this world. Let’s take care of our world, not look to escape it.

What do you think? Am I fair in saying that we’re an eschatologically obsessed church? Do you remember the old Left Behind films? Let me a comment below!

For anyone in need of an explanation as to why I think the rapture is a bad idea, see this article.