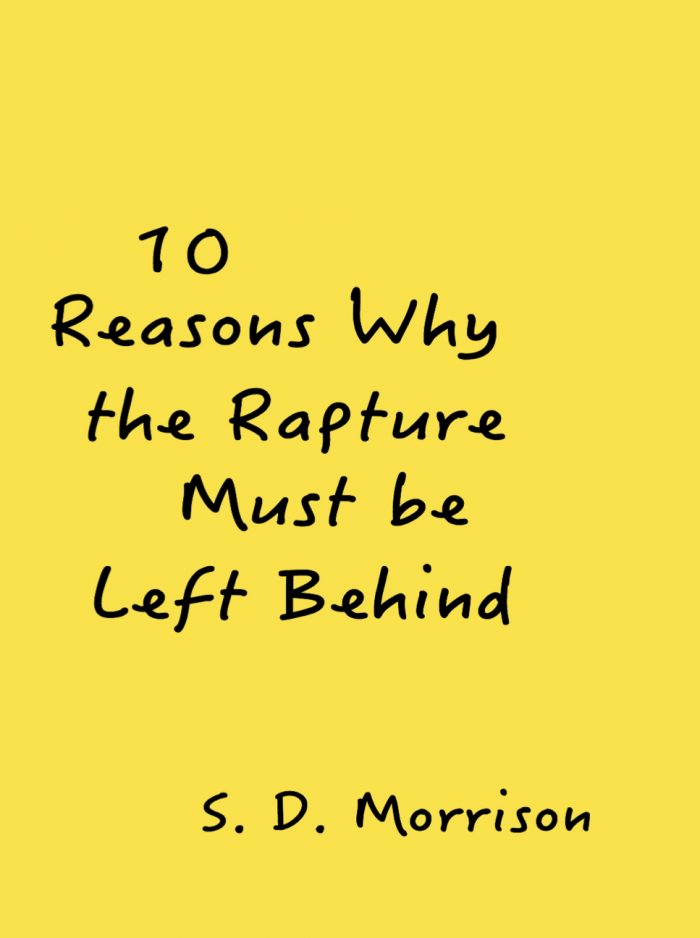 In 2015, I published a short book called 10 Reasons Why the Rapture Must Be Left Behind. It was essentially written as a marketing ploy, the idea being to take one of my most popular articles at the time and expand it into a free ebook. The goal was to then collect email subscribers from the book’s popularity. But as of today, it has been removed from all publishing platforms and was thus effectively “unpublished.”

I want to briefly explain why I did this as well as give some insight into my writing career thus far.

I have been writing since 2013, and my first book was released in January 2014. That book, The God Who Solves Pain, has also been unpublished, and while this has been the case for a few years now, I have not made much of its unpublishing. I consider that first book to be a blunder, something poorly constructed and hardly worth reading. Of course, every mistake contains a lesson, but it is something else entirely when that mistake is offered up for sale under the illusion of it still carrying my full blessing. Theologically, the book also fails to reflect my current perspective on the problem of suffering, even though I am thankful for those the book has helped.

My second book, Where Was God? —while I still consider it to be a somewhat sloppy book—is still available to purchase. In contrast to my first book, the way this book deals with theodicy comes closer to how I would address the question today. And for all its faults, the book’s structure has some merit. I wrote it as a fictional conversation among four friends, contrasting three popular views on suffering from Moltmann’s approach (or, at least, my faulty attempt at describing his theology). So it remains a unique approach that will likely help some come to grips with a new perspective on that age-old question.

But with the rapture book, the problem is I still agree with its premise—mostly. The reasons for unpublishing it have less to do with the argument (I am still ardently opposed to the rapture theory) but with the way it was expressed. Looking back over the work now, it is clear to me that the idea was poorly researched and even more poorly written. I look back through it with almost complete embarrassment. But that was not the main reason why I removed it.

Most of all, I removed my rapture book because I am no longer interested in writing books I do not care about, and I am done with writing books solely because I think others will read them. In other words, I never want to write a book again for anyone else but myself. That may sound selfish but my intention is anti-consumerist rather than egotistical. I think the best books that have been written are those which the author felt obligated to write—could not not write them, in fact—rather than what they felt might sell.

For example, I am currently finishing up a book that examines theological themes in the works of Samuel Beckett. I have little to no idea who will read it—if anyone. It is such a niche subject, but it is a topic that interests me to no end. My Beckett-shelf is actually the second largest collection of books in my home library (Barth, it should be no surprise, is first). So it feels like a project I had to write, even though I have no idea what will come of it.

And that is the only kind of writing I want to do in the future. Popular or not, I aim to write only books that authentically reflect who I am. That does not exclude the possibility of future-blunders—as I am certain I will make many more in the years to come! But it does refocus my attention away from trying to sell books to actually writing books worth reading. So in unpublishing my rapture book, I aim to disavow myself entirely with all marketing ploys trying to manufacture readers of books I never really enjoyed writing in the first place.

I suppose this all comes from maturity, both as a writer and a man. Now that I have been at this for over eight years, it feels like I’ve reached a point of clarity about what my goals and aspirations are as a writer. So to those of you who benefited from my rapture book, I want to say that I am very glad to have been of help, however small. It is an honor to know one’s work is appreciated. But know that book is not me nor is it unique. There are plenty of better books on the rapture! In the future, I aim to write only what’s true and honest.

One thought on “On Unpublishing My Rapture Book”