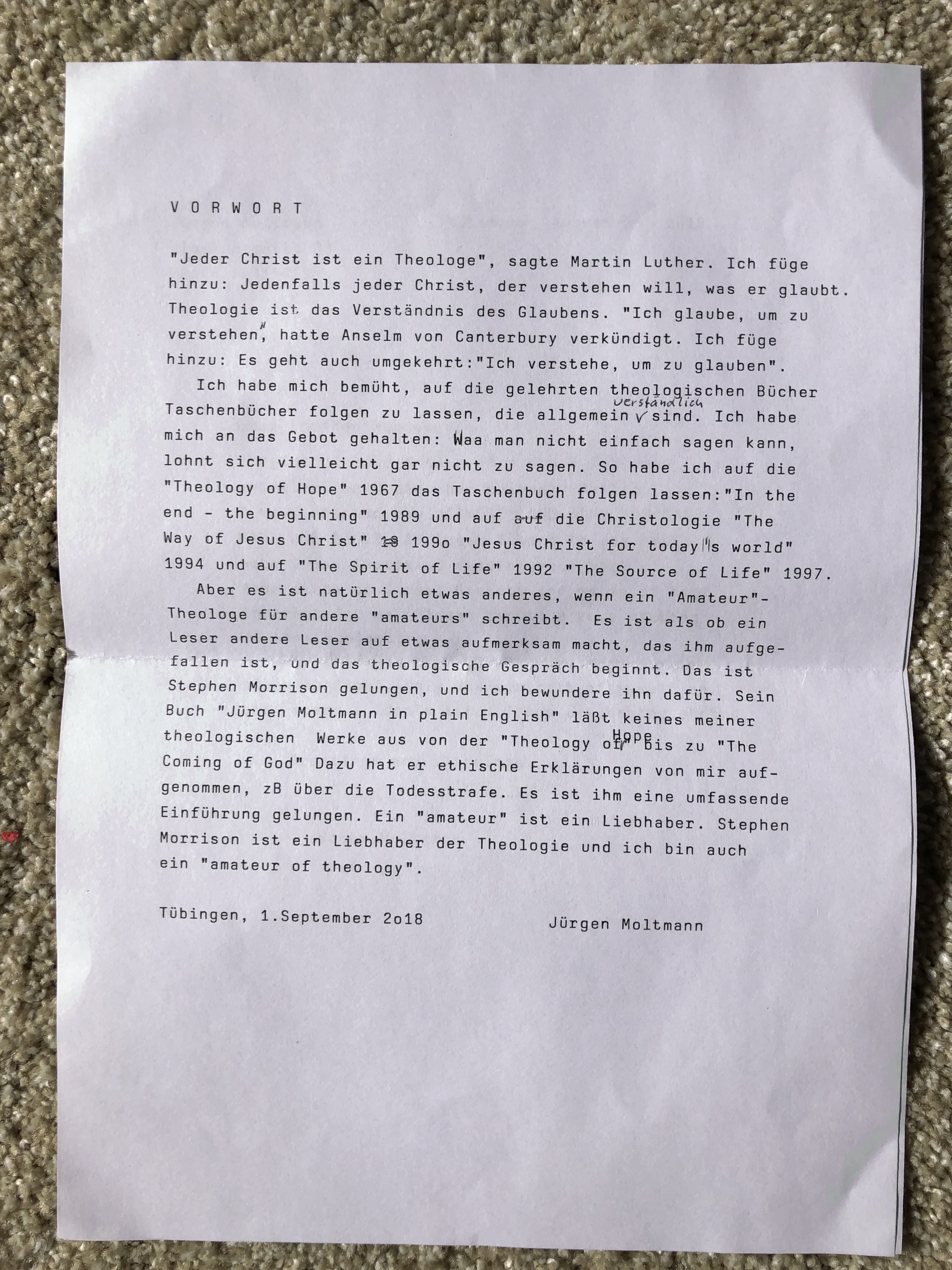 I was shaking from nerves as I opened his letter. I had written Moltmann three months ago, sending him a copy of my new book, Jürgen Moltmann in Plain English, and asking if he might be willing to write a foreword to it.

I was terrified that he wouldn’t like this book I had written about him. As an author, it is one thing to be afraid that your readers might not like your work, but it is something else entirely to think about the possibility that one of your heroes and the theologian of whom you are writing might disapprove.

It was such a relief to find that not only did Moltmann enjoy my book, but he was kind enough to write its forward!

In his letter, Moltmann expressed thanks for my book and how much it impressed him(!). (The letter is now framed and sits above my writing desk.) He then encouraged me to continue my writing; particularly, he encouraged me to pursue the project I wrote to him about on Samuel Beckett and himself, since this was of great interest to him.

I am so overjoyed and honored by his response. In all honesty, I am also still a bit in shock, even though I opened his letter over five days ago. Moltmann’s kindness towards my humble little book is such an encouragement to me.

I have updated the published edition of my book to include Moltmann’s foreword. Anywhere my book is sold—Amazon, The Book Depository, iBooks, Barnes & Noble, and my own webstore—now include, in both the paperback and digital editions, his foreword. If you have purchased my book previously and would like to receive an updated edition of the text, please contact me.

But for those of you who have already purchased the book, you can read it here. Here it is in the original German and then below in its published English text (translated by Cameron Coombe, with slight revision).

I have endeavored to follow up scholarly theological books with shorter, generally accessible works. I have kept myself accountable to the injunction: “That which cannot be said simply is perhaps not worth saying at all.” As such, I followed up Theology of Hope (1967) with the popular-level work, In the End—The Beginning (2004), my Christology, The Way of Jesus Christ (1990), with Jesus Christ for Today’s World (1994), and The Spirit of Life (1992) with The Source of Life (1997).

But it is, of course, another matter when an “amateur” theologian writes for “amateurs.” It is as if one reader alerts another to something striking and the theological conversation begins. This is what Stephen Morrison has succeeded in doing, and I admire him for it. His book, Jürgen Moltmann in Plain English, does not omit any of my theological works, from Theology of Hope to The Coming of God. In addition to this, he has included ethical comments from my work, such as concerning the death penalty. He has succeeded in providing a comprehensive introduction.

Thank you so very much Jürgen Moltmann!