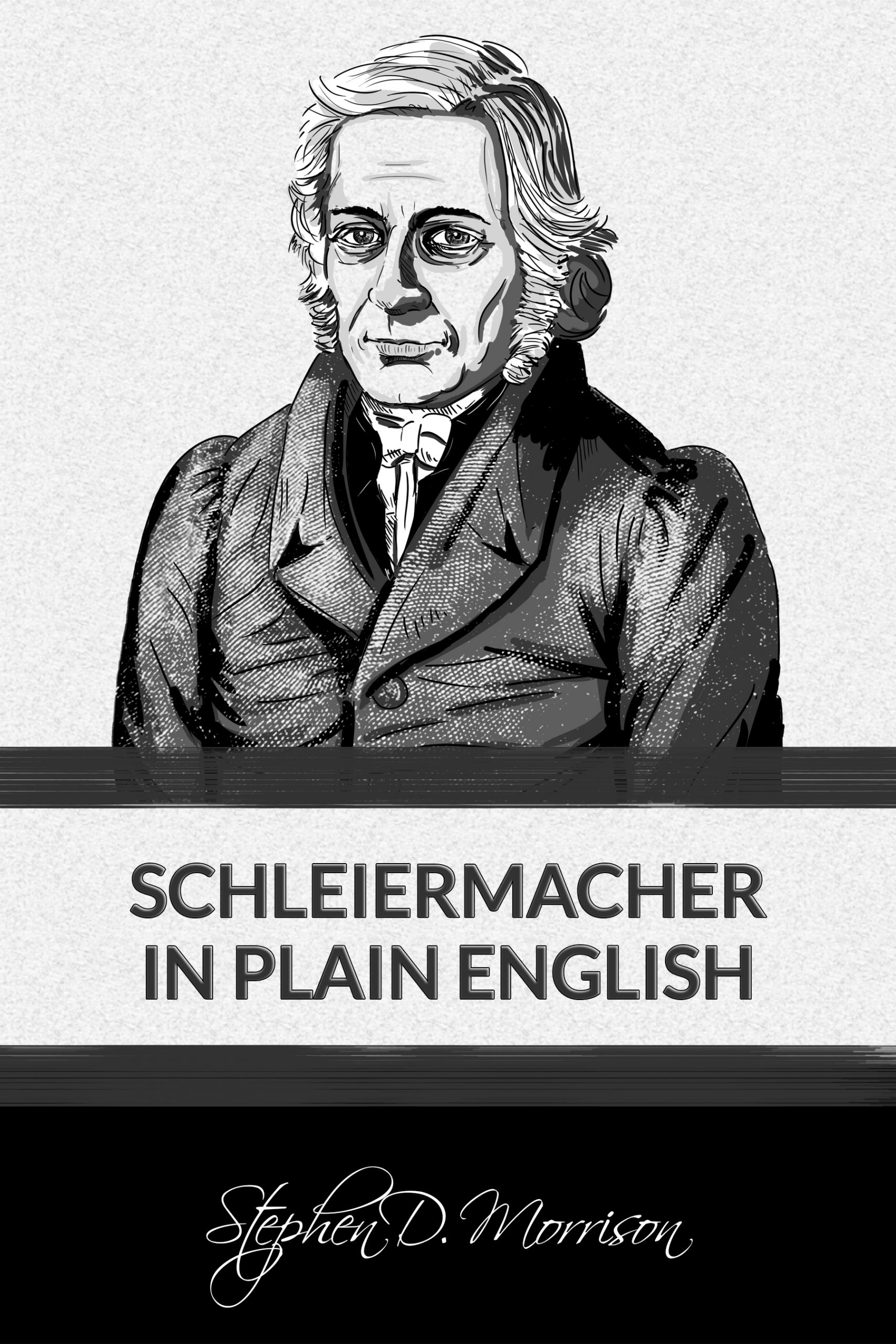 I am very pleased to announce that, after a year of intensive study, I have finished my new book, Schleiermacher in Plain English. I am extremely proud of this book. It challenged me more than anything else I’ve written, and I believe it is my best work yet.

But Schleiermacher is an odd choice for most. He is not often celebrated by theologians. In fact, he is often talked about as if he were the “villain” of modern theology. Especially following Barth’s critique, why should anyone read Schleiermacher? Why did I choose to study Barth’s greatest theological adversary?

In spite of his dubious reputation, I found Schleiermacher to be an extremely compelling and interesting theologian. This surprised me. The image Barth led me to hold about him was far different from the one I discovered in his work. In short, I discovered a Schleiermacher wholly unlike the one I was taught.

As Schleiermacher himself said in defense of his dogmatic masterpiece, Christian Faith, “The best that can be of me is that I am not what they take me to be.” 1

Poor old Schleiermacher, the “villain” of modern theology, the favorite punching-bag of theologians, and the best-known-least-understood “heretic” of modern history. Why on Earth should you read him? Simply, for Barth’s sake!

But Barth is undoubtedly to blame for how little theologians engage with Schleiermacher today. He was one of Schleiermacher’s most severe critics. Yet, at the same time, no theologian sang his praises more clearly.

But Barth’s polemic against Schleiermacher was never purely hostile. It had arisen, first and foremost, out of a deep appreciation for the great Berliner. This is why it should not surprise us to read that, in the final year of Barth’s life (1968), he could write:

It may be surprising that I have declared myself to be at odds with Schleiermacher only with reservations: rebus sic stantibus, “for the present,” “until better instructed.” Something like reservation, a genuine uncertainty, may rightly be detected here. The door is in fact not latched. I am actually to the present day not finished with him. […] For have I indeed understood him correctly? Could he not perhaps be understood differently so that I would not have to reject his theology, but might rather be joyfully conscious of proceeding in fundamental agreement with him? 2

In conversation with Terrence Tice, Barth would also praise Schleiermacher, saying, “There has never been a systematician in modern times like Schleiermacher. He knows the beauty of theology. The rest do not.” 3

At the very least, Barth’s relationship with Schleiermacher is more ambiguous than it has often been portrayed.

In my new book, I sought to reevaluate Schleiermacher from the Barthian perspective. Of course, I wanted most of all to understand Schleiermacher on his own terms, but I cannot escape the difficulties reading him as a Barthian entail. So I sought to read him charitably, to find a new appreciation of his work in spite of how frequently his importance is neglected.

What I discovered is that Schleiermacher is one of the most-important, least-studied theologians of modern times. And (to my surprise) I found he is not wholly incongruent with Barth, but that they may even share an essential harmony. They do not end up in the same place, but perhaps they often have traveled down the same path. It is not only important to read Schleiermacher for Schleiermacher’s sake, but it is vital to read him as a Barthian.

I hope my book takes a small step towards a better appreciation of Schleiermacher’s theology. I have benefited greatly by reading him, and it is a shame that he is not often studied with the seriousness he deserves. He is not easy to read (probably even harder than Barth!), but he is worthwhile. I hope my book serves as a re-introduction to Schleiermacher—against the multitude of bad images of him available, I hope my book can present a more charitable portrait of this great theologian.

Pick up a copy of Schleiermacher in Plain English on Amazon, Barnes & Noble, iBooks, and my own webstore. And feel free to contact me for review copies if you are a blogger or journal editor.