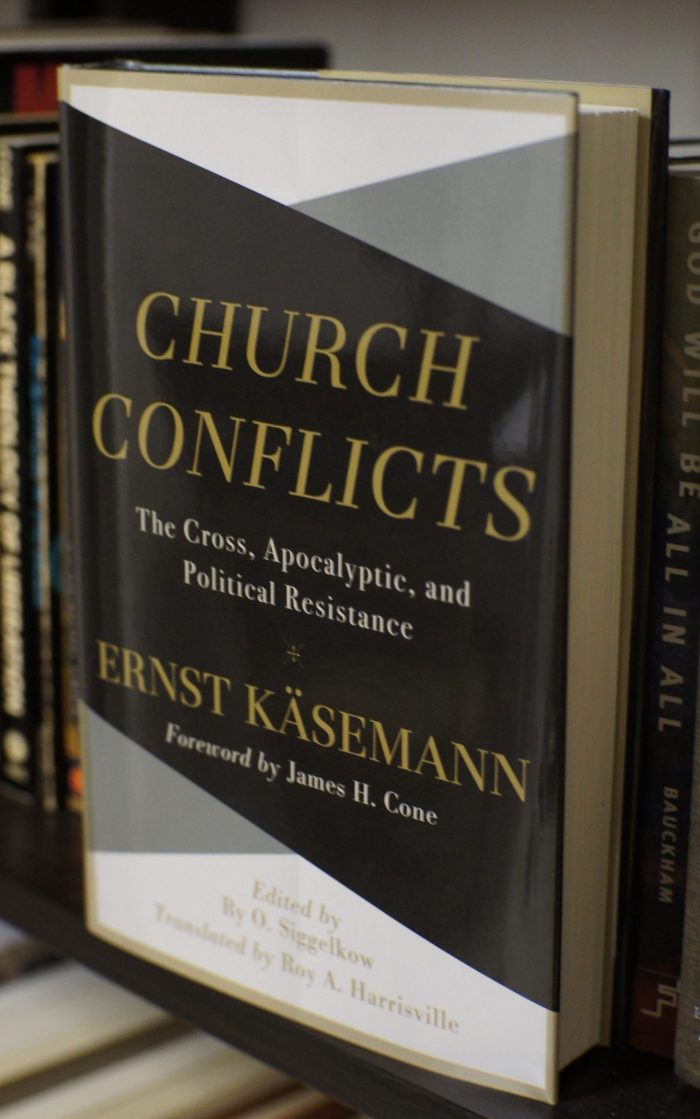 Overview: Available for the first time in English, this collection of essays will be of great interest to both scholars and newcomers to Käsemann alike. As an exploration of Käsemann’s radically political and ecclesial thought, it is a valuable contribution. Here Käsemann is shown to be the liberationist, scholar, and Church leader we need to listen to and learn from again today.

I was initially eager to get a copy of this book because of the foreword by James Cone, which was written just months before his death. Or at least that is what first piqued my interest in this volume. I have not read much from Käsemann, I will admit, apart from a few essays and his short book, Jesus Means Freedom. But after reading this volume, I now wonder why it has taken me so long to get around to studying his theology.

Käsemann’s connection to liberation theology is one of the primary reasons for my interest, and this book makes explicit, perhaps more than others, his liberationist convictions. There is much to admire about Käsemann’s theology and scholarship, but the story of his courageous daughter, Elisabeth, is especially moving. I first heard of her death from Moltmann’s autobiography, but the wonderful introduction to this volume by Ry O. Siggelkow fills in a lot of the gaps. It is important to recognize the congruency between Elisabeth’s courage in the face of martyrdom and her father’s radical theology. The two were not accidental. As James Cone movingly recalls, “Käsemann told me that he wrote about the meaning of liberation theology, but his daughter lived it” (vii-viii).

The essays in this volume are a sublime example of Käsemann’s political thought—and a testament to just how radical it was. He writes, “If evangelical freedom does not show itself as resistance to and separation from every power, even of secular tyrants, then it becomes an opiate” (15). The meaning of freedom is a consistent theme of the essays. In a poignant and powerful summary, he writes, “To have God as Lord is the biblical definition of freedom” (82). This is an excellent summary of what it is to be free in Christ: to have no other gods but the Lord.

And this God who is our Lord is the crucified Christ. As with most of Käsemann’s works, the crucified Christ is central. Yet the political dimension of this focus is made direct: “One cannot be a guest of the Crucified without challenging his enemies and declaring war against all tyrants” (125). That the risen Christ is also the crucified Christ is what separates the Christian faith from mythology. As Käsemann writes, “That the Risen One can only be known by the sign of the cross distinguishes the gospel from ideology and myth” (222). The cross demythologizes the idolatry of God, which has been and is still so often used to justify the abuse of the powerless by the powerful. God must not be identified with rich and powerful tyrants. Rather, God looks like Christ hanging on a rebel’s cross.

The essays in this volume culminate in a personal reflection entitled, “What I, as a German Theologian, Unlearned in Fifty Years.” With the insight that “no one is ever free of learning, consequently also never free of unlearning” (215), Käsemann reflects on his career as a theologian, including interesting and frank remarks on his differences with Bultmann. He writes of his affection for Bultmann but how, at the same time, “I more and more strongly found Bultmann’s central concern too narrow” (220).

But while Käsemann’s relation to Bultmann will be of interest to scholars, what is perhaps most striking about this book is the continual reminder that “Christianity is no longer determined by the White Man” (224). As Käsemann stresses, the majority of Christians—by number and passion—are people of color. The days of our Christian faith being defined and determined solely by the concerns of the first world, with white male Church leaders and theologians at the forefront, have come to an end. Perhaps that is why James Cone writes, “Among all the German theologians, or Europeans for that matter, whom I came to know when I began writing, Käsemann was the only one who understood me. He was a man of my own mind and heart and wrote concretely about what I was trying to express in my own situation” (viii).

Käsemann reduces this lesson to its common denominator:

“I unlearned the spiritualization of the Beatitudes of the Sermon on the Mount. They promise that the kingdom of God—whose inbreaking on earth brings with it signs and wonders, healing and liberation from possession—will not only rescue earth from our egoism, sluggishness of heart, and hypocrisy but also from the tyranny of the powers enslaving it, taking each of us into its service and supplying the gifts needed for it.” 1

The Gospel does not have something to say to politics; it is a political reality, as Käsemann continues:

“If the heart of the gospel (already contained in the first commandment) is concretized in the New Testament to signify that Christ is for us the true Lord of the world, then the gospel will not occur without political judgments in proclamation. Christ’s lordship is over body and soul, heart and head, over disciples and demons—in this world and in the world to come—and is also a political fact. For the earth is always claimed by idols, whom only naïveté can call invisible.” 2

Conclusion: This collection of essays is valuable and timely. The need for the Church today to “unlearn the spiritualization of the Beatitudes”—together with a new theology that is no longer determined by the concerns of the “white man”—is especially dire. Käsemann’s combination of scholarship and passionate concern is a powerful example of a theologian who is not content speculating about the clouds above while many suffer here on the earth below. A gospel that has nothing to say to the tyranny of the powers that be, the oppression and abuse of the poor and weak, is not the same gospel Christ proclaimed.