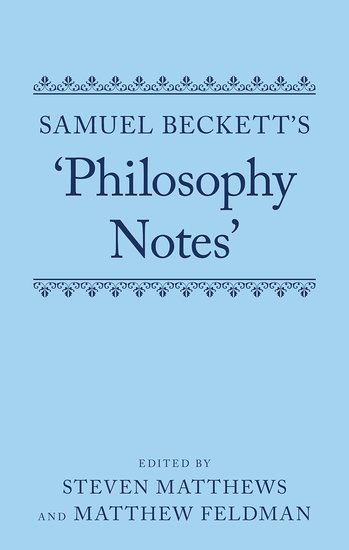 Overview: This volume contains Becket’s most extensive previously unpublished writings: his philosophy notes from the 1930s. The editorial work that went into the text is impressive, as the notes are insightfully cross-referenced with Beckett’s literature by two leading scholars. The majority of the work, however, is a collection of notes from other sources, with very few comments from Beckett directly. But that fact does not limit this volume’s value for researchers and passionate readers alike.

Samuel Beckett’s relationship with philosophy is complex. On the one hand, his novels, poems, and plays are arguably among the most philosophically profound of the twentieth century. Yet he also actively tried to distance himself from philosophy. For example, in an interview, he once brazenly said, “I never read the philosophers… I never understand what they write.” 1 This confession is an apparent falsification in the light of these lengthy and detailed notes, as they demonstrate how Beckett not only read the philosophers but studied them closely.

But on the other hand, it is clear that what Beckett sought to write was not philosophy in the proper sense but something akin to a  literary “meta-philosophy.” He claimed that “I wouldn’t have had any reason to write my novels if I could have expressed their subject in philosophic terms.” 2 Thus, his literary output is philosophical to the degree that it goes beyond philosophy into that which philosophers cannot so neatly state. Beckett’s quest for the literature of “unword” necessarily passes through philosophy while going beyond it into the inexpressible.

But whatever we make of Beckett’s approach, it is hard to ignore the long list of philosophical references in his writing. With this volume, we now have access to his private “common book” for philosophical thought. And thus, the value of this volume is that it offers exceptional insight into the notes Beckett kept and frequently referred back to throughout his writing career.

So who will benefit from this book?

Most of all, scholars will benefit from this work. But the passionate reader of Beckett will also find much to contemplate and consider.

The volume is a great background-forming work offering a more profound sense of where Beckett derives some of his more abstract ideas. Especially interesting is his focus on the early Greek and Roman philosophers. Avid readers of Beckett will be familiar with his occasional references to Zeno, Kant, and Geulincx. Or perhaps they will be aware of his readings of Schopenhauer and Aristotle. But it was surprising to discover the range of Beckett’s notes, which cover far more than what made its way into his written works.

And it is here that the editor’s notes become so invaluable. They trace these notes to even the most obscure reference in Beckett, and the results are fascinating.

Two examples will suffice to demonstrate the value of this book.

First, a phrase Beckett uses to summarize Alexandrian philosophy, particularly its dualism, is apt for his later work: “The conception of deity was raised to complete absence of all qualities. Philo calls God devoid of qualities. No name names him.” 3 The editors’ footnote reads: “An interesting formulation from the author of The Unnamable.“ 4 Indeed, the sense of the divine being a “God above God” is something that I noted in my book on Beckett. I found this phrase a rare example of Beckett’s creative genius shining through in these notes. The editors seem to indicate that this summary of divinity being that which no name names, which, if true, is an excellent Beckkettian phrase.

Second, Leibniz is not a figure commonly connected with Beckett, but the notes tell another story. After defining Leibniz’s definition of identity, the editor’s insightfully related it to his work, writing:

This Leibnizean definition of identity is important to Beckett’s less than secure protagonists; Molloy, for instance, tells us that ‘if ever I stoop…or kneel,’ without doubt, ‘it will not be me, but another’ (p. 34); the issue is impacted within the parameters of the whirling of Watt, from the neutral ‘for Watt to get into Erskine’s room… Watt would have to be another man’ (although he gets in), to the crazed ‘Tom is Tom and Dick Dick… But why Tom Tom? And Dick Dick?’ (pp. 109, 115). 5

This follows Beckett’s explanation of Leibniz’s concept of the “force-substance” or “monad. He notes, “Each monad is, with reference to the rest, perfectly independent, unable to exercise or experience influence. Their ‘windowlessness’ is expression of their ‘metaphysical impenetrability.’ … But yet each is individual, there are no 2 substances alike.” 6 The editors further note how this concept of a monadic “windowlessness” is a potent idea for Beckett’s early fiction.

This example is fascinating because it shows how these notes may open up new avenues to explore in Beckett’s work. I know little to nothing about Leibniz and would have never discovered this reference on my own. But here, the door is opened for a new way to think about Beckett’s work.

Another joy of this work will be for those who are interested in philosophy as such, regardless of Beckett’s relation to it. These notes introduce the reader to various philosophers and schools of thought.

As a theologian, Beckett’s lengthy notes on Augustine—calling him the “father of modern thought” 7—and other theologians were fascinating to read. I wrote in my book, Christ’s Wait for Godot, about Beckett’s affinity for theological thought. I argued that Beckett used negative/apophatic theology as the basis for some of his central motifs. This view is verified by his extensive notes and evident familiarity with these schools of thought. While such readings remain dubious and accidental apart from the texts themselves, these notes can provide a wide range of verifications such as these for scholars who have had numerous suspicions about influences on Beckett’s work (conscious or not).

Overall, the text is undoubtedly a valuable contribution to Beckett-studies. And for passionate readers, it will be a joy to explore.

I would recommend the book for scholars, who will likely already be familiar with its existence, but most of all for passionate readers of Beckett who are, like me, eager to trace Beckett’s intellectual development and follow even his most obscure references to their origin. It is a marvelous editorial success; Matthews and Feldman have given the Beckett world a gift in this volume.