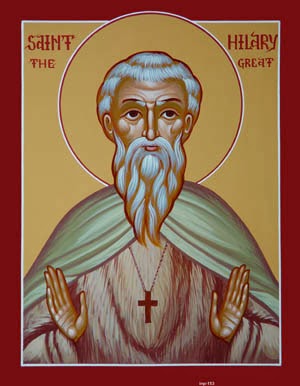 I’ve been reading St. Hilary of Poitiers book On the Trinity this week (buy it here). St. Hilary has been called “the Athanasius of the west.” He beautifully presents a case for the Trinity, the divinity of the Son, and the incarnation. Here are seven stunning quotes from this work. (In no particular order)

“He conquered death, broke the gates of hell, won for Himself a people to be His co-heirs, lifted fleshed from corruption up to the glory of eternity.”

“He by Whom man was made had nothing to gain by becoming Man; it was our gain that God was incarnate and dwelt among us, making all flesh His home by taking upon Him the flesh of One. We were raised because He was lowered; shame to Him was glory to us. He, being God, made flesh His residence, and we in return are lifted anew from the flesh to God.”

“He did it that by His Incarnation He might take to Himself from the virgin the fleshly nature, and that through this commingling there might come into being a hallowed body of all humanity; so that through that body—which He was pleased to assume—all mankind might be hid in Him, and He in return, through His unseen existence, be reproduced in all.”

“For he is the best student who does not read his thoughts into the book, but lets it reveal its own; who draws from it its sense, and does not import his own into it, nor force upon its words a meaning which he had determined was the right one before he opened its pages.”

“For He took upon Him the flesh in which we have sinned that by wearing our flesh He might forgive sins; a flesh which He shares with us by wearing it, not by sinning in it. He blotted out through death the sentence of death, that by a new creation of our race in Himself He might sweep away the penalty appointed by the former Law. He let them nail Him to the cross that He might nail to the curse of the cross and abolish all the curses to which the world is condemned.”

“God the Word became flesh, that through His Incarnation our flesh might attain to union with God the Word. And lest we should think that this incarnate Word was some other than the Word of God, or that His flesh was of a body different from ours, He dwelt among us that by His dwelling He might be known as the in dwelling God, and, by His dwelling among us, known as god incarnate in no other flesh than our own, and moreover, though He had condense ended to take our flesh, not destitute of His own attributes; for He, the only-begotten of the Father, full of grace and truth, is fully possessed of His own attributes and truly endowed with ours,”

“There is no space where God is not; space does not exist apart from Him. He is in heaven, in hell, beyond the seas; dwelling in all things and enveloping all. Thus He embraces, and is embraced by, the universe, confined to no part of it but pervading all.”