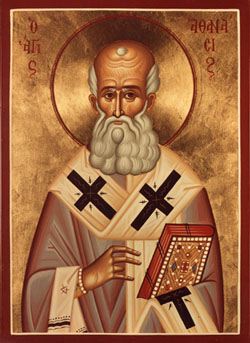 St. Athanasius is, in my opinion, the most readable and enlightening of the early church Fathers. His short work “On The Incarnation” has become a favorite of mine. It is devotional, and inspires praise while at the same time theological, and highly intelligent. I highly, highly, highly recommend that you pick up a copy of this wonderful book. (I think it’s only 99 cents on Kindle, and probably free elsewhere.)

I’ve picked up this book for the second time this week, and I wanted to share a great passage out of it I read today. Don’t rush through what’s being said, instead I encourage you to read carefully and savor what it is this great early church father has to say.

“Thus, taking a body like our own, because all our bodies were liable to the corruption of death, He surrendered His body to death instead of all, and offered it to the Father. This He did out of sheer love for us, so that in His death all might die, and the law of death thereby be abolished because, having fulfilled in His body that which it was appointed, it was thereafter voided of its power for men. This He did that He might turn again to incorruption men who had turned back to corruption, and make them alive through death by the appropriation of His body and by the grace of His resurrection. Thus He would make death to disappear from them as utterly as straw from fire.

The Word perceived that corruption could not be got rid of otherwise than through death; yet He Himself, as the Word, being immortal and the Father’s Son, was such as could not die. For this reason, therefore, He assumed a body capable of death, in order that it, through belonging to the Word Who is above all, might become in dying a sufficient exchange for all, and itself remaining incorruptible through His dwelling, might thereafter put an end to corruption for all others as well, by the grace of the resurrection. It was by surrendering to death the body which He had taken, as an offering and sacrifice free from every stain, that He forthwith abolished death for His human brethren by the offering of the equivalent. For naturally, since the Word of God was above all, when He offered His own temple and bodily instrument as a substitute for the life of all, He fulfilled in death all that was required. Naturally also, through this union of the immortal Son of God with our human nature, all men were clothed with incorruption in the promise of the resurrection. For the solidarity of mankind is such that, by virtue of the Word’s indwelling in a single human body, the corruption which goes with death has lost its power over all. You know how it is when some great king enters a large city and dwells in one of its houses; because of his dwelling in that single house, the whole city is honored, and enemies and robbers cease to molest it. Even so it is with the King of all; He has come into our country and dwelt in one body amidst the man, and in consequence the designs of the enemy against mankind have been foiled and the corruption of death, which formerly held them in its power, has simply ceased to be. For the human race would have perished utterly had not the Lord and Savior of all, the Son of God, come among us to put an end to death.”