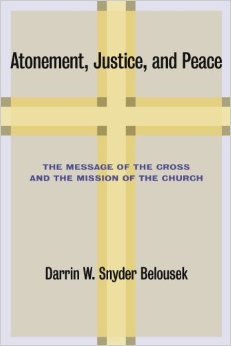 Penal substitutionary atonement is a theory which attempts to explain the meaning and purpose of Christ’s death, how Jesus’ death saves and what it means for the world. It’s a theory which I have argued against openly and often, I’ve written extensively against it in my book We Belong: Trinitarian Good News. Penal substitution is also the subject of the next two books I plan to publish in the near future, one which places Karl Barth in dialogue with the so-called “atonement debate,” and another to deal directly with penal substitution and argue against it. So it goes without saying: I am passionate about seeing an end of the penal substitutionary atonement theory in the evangelical church today.

I recently finished reading a fantastic book, one of the best I’ve read this year (and I’ve read over 100 books so far!), which I believe may do exactly that: this book, I hope, will be the final nail in the coffin of penal substitutionary atonement. The book I’m referring to is Darrin W. Snyder Belousek’s Atonement, Justice, and Peace. This book is the most complete argument I have ever read against penal substitution, and it’s written in a clear, accessible manner so that anyone can pick it up and read it without much difficulty. Don’t be daunted by the fact that this is a 700 page book, this is a clearly written, accessible book that just about anyone with a basic understanding of the bible can read.

Today I simply want to recommend this book to you, discuss the main argument in it, and also briefly introduce penal substitution for anyone unfamiliar with it. I’ve never felt so encourage by a book on the atonement, and for that reason I give this book a whole hearted endorsement and I hope you take the time to read it.

What is Penal Substitution?

Penal substitution rest on three basic ideas. First and foremost, the notion of retributive justice, that God requires the death of a perfect sacrifice to forgive our sins. In short, that on the cross Jesus Christ died to pay back God’s justice. Second, that the wrath of God must be appeased, that God is full of wrath towards us and must have that wrath satisfied, or “propitiated” in Christ’s death. And finally, the third notion is that God turned His back on Jesus Christ in His death, that Jesus was forsaken and abandoned because God cannot look upon our sin.

Penal substitution is the most common atonement model within the evangelical church today. It’s often preached with the analogy of a courtroom. God is a holy judge, and we are the guilty sinners. God’s justice demands payment, demands our death, and therefore God’s wrath is against us until payment is made. We deserve punishment, but we are unable to pay back God’s justice or appease His wrath. But Jesus Christ came out of love for us and died in our place; God punished Jesus instead of us, thus paying back the Father’s justice, satisfying His wrath, and saving us from hell.  God turned His back on Jesus Christ, and in forsaking Him, God now accepts us as His children. God’s wrath is appeased, God’s (retributive) justice is satisfied, and God can now accept us as His own. This is penal substitution: Jesus Christ is punished (penal) in our place (substitution).

Belousek brilliantly sees the foundational presupposition behind penal substitution to be the idea that God’s justice is retributive, that is, that God’s justice demands equal payment for an offense. In short, penal substitution rests upon the lex talionis, the “eye for an eye” of the levitical law. God’s justice demands our death as payment for sin, and God is bound by this kind of justice and thus cannot forgive our sins without payment. Thus Jesus suffers God’s punishment in our place, so that God’s wrath can be appease and we can be forgiven. But the question we have to ask is this: do the scriptures understand God’s justice in this way? Is the justice of God, revealed to us in Jesus Christ, a retributive kind of justice or a redemptive kind of justice?

Belousek argues, rightly, that God’s justice is not retributive. Jesus Himself argues against any “eye for an eye” sort of justice in the sermon on the mount. (Matthew 5:38-42) But penal substitutionary atonement basis its entire paradigm on this idea. Belousek thus carefully and thoughtfully takes us through the bible and shows us that this idea comes not from the scriptures but from Greek philosophy. Aristotle and Socrates, who in turn influenced Augustine and thus infiltrated the west with this idea, are the originators of this kind of justice. The scriptures actually have no concept of retributive justice (not even the lex talionis, Belousek argues, is God’s will). The only kind of justice we see in the scriptures is the justice of mercy, the justice which heals, the justice of redemption. The scriptures present a kind of justice that looks more like “making right what’s wrong” (redemptive justice) instead balancing the legal scales (retributive justice). Belousek brilliantly takes you through ever problematic scripture, from Isaiah 53, Romans 3, the levitical law, and the prophets, in order to show this point.

The beauty of this argument is in its successful identification and removal of the foundation of penal substitution; what remains for the rest of the book is the joyful and systematic demolition of this theory. There is nothing left standing by the end of this book. There is no scripture which has not been examined, there is no presupposition left hiding, penal substitution is effectively put to death. There is an elegance and a brilliance to Belousek’s argument, and I have not doubt that this book will be the end of penal substitutionary atonement for anyone who reads it—and hopefully for the evangelical church as a whole.

I cannot stress how highly I recommend Belousek’s book. Perhaps one day the church will look back to it and say, “This was the book that once and for all exposed and demolished the heretical penal substitutionary atonement theory!” You can purchase Atonement, Justice, and Peace here.