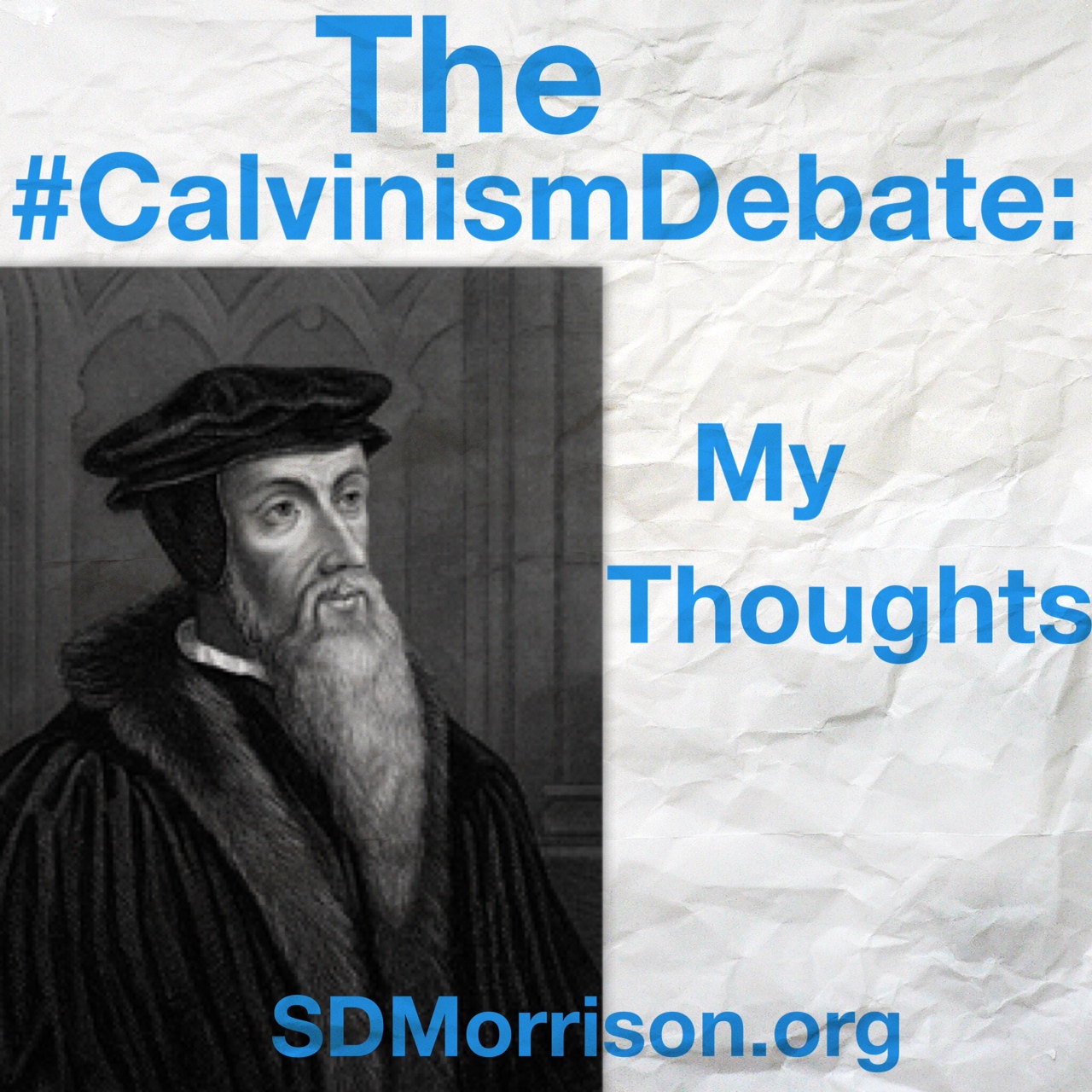 Hello friends! I’m glad to be back from a month long blogging sabbatical. Today I’m interested in sharing a few of my thoughts on the Calvinism Debate (hosted by Zondervan) which took place on Wednesday night. This debate was filled with many great moments, a few not-so-great moments, and overall a lot of complex ways of addressing two very simple ideas.

The format of this debate went like this. There were two statements (called Propositions) about Calvinism. The first is against Calvinism, the second is for Calvinism. The host did a great job in choosing these statements because they certainly cut right to the heart of Calvinism. These two statements are: #1 “Calvinism necessitates unconditional predestination and unconditional predestination is incongruent with the God revealed in Jesus Christ.” In other words, unconditional election is contrary to the nature of Jesus Christ. #2 is “The cause of repentance and saving faith is not synergistic but monergistic.” In other words, how are we saved? Do we participate in our salvation (Synergistic) or is it solely the work of God done upon us (Monergistic)?

Here are the videos if you’d like to watch this for yourself (I personally enjoyed video 1 more than video 2, especially Brian Zahnd’s remarks)

I agree with statement #1 (I am therefore, against the Calvinists here), but I also agree with position #2 (I am therefore, for the Calvinists here). I condition my agreement of #2 on a limited basis. Those against position two, and therefore against the Calvinist position, made great points as well that I echo myself. However, I agree more with the Calvinists on that issue, but believe I have a solution to fix the complains against both Synergism and Monergism (thanks to Robert Capon!) But we’ll get to that. Here are my briefly explained positions on both unconditional election (position #1) and Monergism vs Syngergism (#2).

In position #1, I disagree whole heartedly with the doctrine of double predestination, and with it the whole Calvinistic system of sovereignty. For this I lean on Karl Barth for his much needed re-interpretation of the doctrine of Election. For Barth, Election is not a matter of God choosing one person for salvation over another person for damnation. Instead, Election is God choosing Jesus Christ for both election and reprobation. This plays a lot into Barth’s concept of the election of Israel and how that foreshadows the Election of Jesus Christ. This is certainly a far to complex thing to cover here. But to say one thing I will say that for Barth, and I agree with him here, Election is not, because it has never been, about God choosing one person instead of another. For Barth, Election is God choosing one individual nation or person for the sake of the whole world. This is then a vicarious form of election.

When we then look at Jesus, He becomes the Elect One who is chosen not instead of everyone else, but for the sake of the entire cosmos. God excluded everybody from the salvation business except for one Man Jesus Christ, in order that He might include all of creation through this one man. This is essentially my position on double predestination. I disagree with Calvin, and prefer the adjustments made by Karl Barth.

As far as position #2 goes, things are a little bit more complicated. I found myself agreeing with both sides of the debate at times. This half of the debate was more difficult to decide a clear position for myself personally. I do agree with the Calvinistic position on Monergism, but at the same time I likewise agree with the denial of this in favor of Syngergism because of the robotic nature of Monergism. The analogy I believe Brian Zahnd used was that in Monergism, God dances with a mannequin. He takes no risk in wooing us to Himself. He forces us to dance, thereby risking nothing at all in the process. This echoes C.S. Lewis’ brilliant remarks that “to love it all is to be vulnerable.” So I find myself struggling to balance between the two. Both positions had clear scriptural proofs, and both had great theological principles at play.

It wasn’t until I thought it through in the light of the works of Robert Capon that I finally came to a conclusion. Robert Capon brilliantly offers a solution to this in part three of his book Between Noon and Three. (An excellent book, by the way!) He writes similarly to Monergism, that we cannot come to God on our own efforts, but He must draw us to Himself. We therefore only come to Him dead with the promise that He will raise us to life again. However, where Capon differs in the execution of this raising from the dead. For Capon, who is not a Calvinist, he did not have to work around a doctrine of limited atonement. He therefore is able to say that in Christ all people have died and have raised to life. He therefore affirms the Monergistic approach in saying that it is only if God calls you that you can come into the kingdom. Yet, he also helps with the Synergists in their position that the Monergistic God is a God who takes no risks.

Now this does not equal universalism for Capon. Instead here we have to play again on an analogy used in the debate. For Capon, all men and women have risen to new life by God in Christ Jesus. Therefore, all are at the “party” or “dance.” All are included in the work of Christ. Therefore, all are at the dance, all are in a sense “saved.” The difference—and this is important!—for Capon is that your inclusion into the party does not force you to enjoy the party. You are here, you are in the dance, but you are not forced to enjoy the party at all. You can sulk around and be a party pooper all you’d like. But you cannot change the fact that you have been included into the party by no merit of your own, solely through grace. This then for Capon is Eschatologically how he works in hell. Hell is for those who, while still at the party, choose to reject the party by not enjoying the party. This then Echoes C.S. Lewis’ remarks in the Great Divorce where he writes that hell is within heaven, but it is so small that it fits within the tiniest crack in the floorboard of heaven.

This then essentially sums up my position on both of these statements and of the overall debate. As I’ve written before, I would currently consider myself theologically inclined to the Neo-Orthodox or Barthian camp. This influences heavily my opinion of this debate. I do disagree with TULIP, and the overall thrust of Calvinism. However, there is also much I respect from the Reformed tradition (including Calvin Himself).

The overall debate was interesting to watch. Both sides did a fairly good job at articulating their position within the limited amount of time. But just in closing I’ll mention a few of my favorite moments, and the moments I found the most ridiculous!

I really enjoyed just about everything that Brian Zahnd said. I read his book A Farewell to Mars and was stirred a great deal by it. I haven’t heard much else from him so this was really the first time I’ve ever heard him speak live. But I found his points very well thought out and well presented. He had a clear scholarly approach that I appreciated. I found especially the calvinists lacked this same approach. As a whole, the Calvinists mainly kept repeating “this is what is true, who are you to question God?” Although no entirely…

A few quotes then that I enjoyed:

“On the cross we see a God who would rather die than give sinners what they deserve.” – AF

“If God created just one sentient being for the sole purpose of damning that person to hell, I would tell that god that he was immoral. And if that god condemned me to hell for my actions, I would console myself through the ceaseless ages of agony with this one comfort: I told the truth.” – BZ

By far the most ridiculous moment had to have been Daniel Montgomery’s statement about a “plain reading of Paul.” Here we are debating Calvinism, and so far, the logic is flowing great, when all of a sudden someone pulls the classic “it’s just in the bible, read it!” as if that’s not what we’ve been doing this entire time. This is a typical move though for the unlearned in theology, although I doubt Daniel is unlearned, which is partially what makes the remark so hilarious! As a theologian, the last thing you should say is that people need a “plain reading of Paul.” Brian’s response to this was brilliant.

I guess for a conclusion I would say that I hope we find a way beyond both Calvinism and Armenianism, alike. For this I hope we can adopt the revolutionary ideas of Karl Barth, and with him T.F. Torrance, N.T. Wright, and Robert Capon.

Did any of you watch the debate? What were your thoughts/favorite moments/conclusions? Let me know with a comment! :)