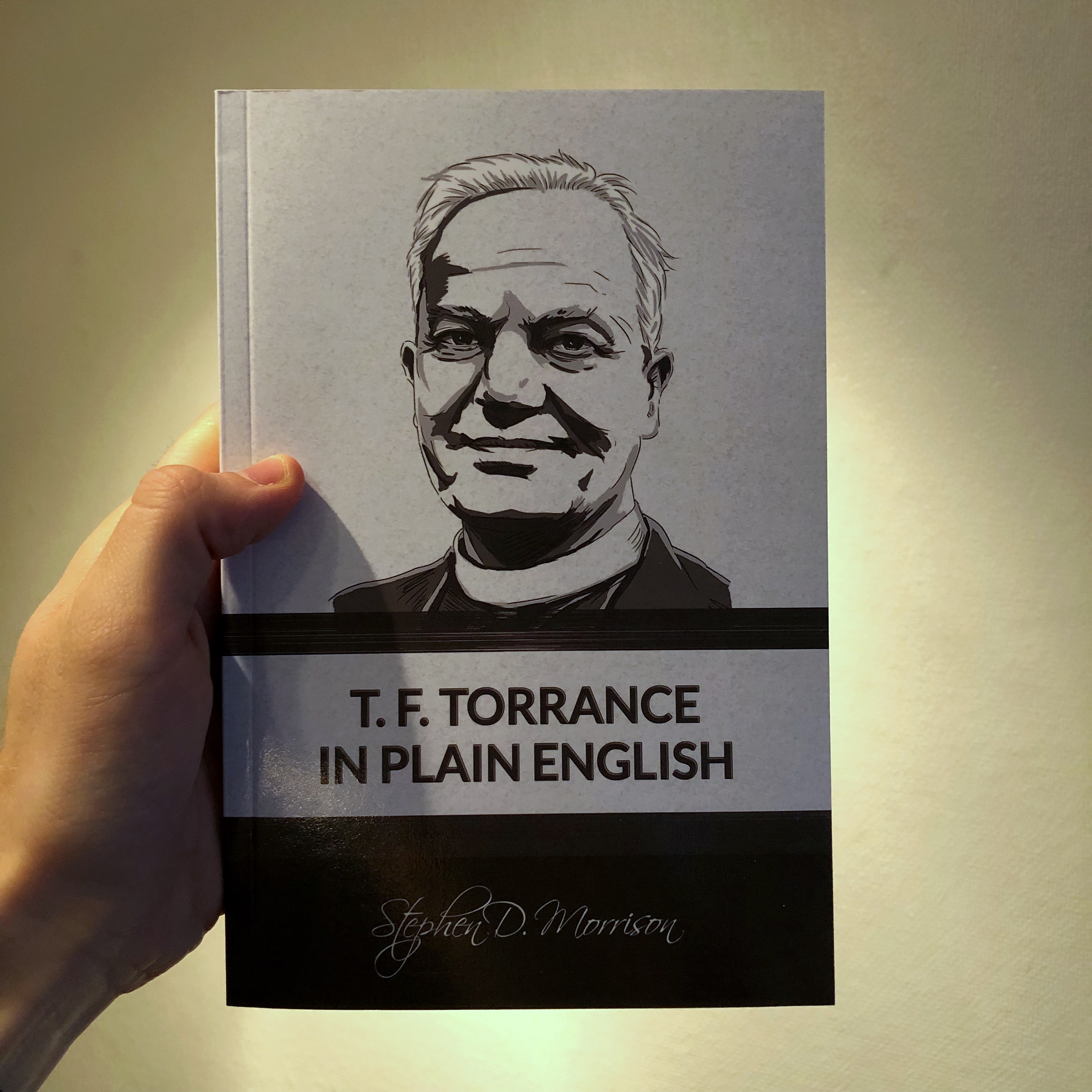 What follows is an excerpt from my new book, T. F. Torrance in Plain English. Here I draw out the implications of one of Torrance’s primary insights: kata physin, which simply means knowledge in accordance with the reality we come to know. This axiom is the subject of chapter two in my book, and this excerpt follows it in what I call a “sidebar,” which directly addresses the problem with apologetics. Sidebars such as this serve to draw out conclusions from major ideas, and they are therefore useful tools I implement in the book for clarifying ideas. Enjoy!

After discovering that Torrance’s theology engages natural science, many Christians today might wrongly imagine this means Torrance was an apologist. The truth, however, is that Torrance was actually quite critical of the task of apologetics, and this is the direct result of his dedication to the concept of kata physin.

If true knowledge of God is knowledge in accordance with God’s nature, then apologetics is a false start because it applies a foreign rationality to God’s nature in the attempt to prove that God exists. By taking a foreign rationality and applying it to God, apologetics tries to prove God as if God were not God, as if God were a man or a star in the sky that might be proven through human rationality. Apologetics, therefore, abstracts God into a philosophical construct, which leads me to wonder: even if apologetics could “prove” God exists, which God would it prove? It is highly unlikely it would be the Christian God and Father of Jesus Christ, and so what then is the point of proving an empty, abstract deity, who is ultimately just a logical construction of our best thoughts?

Naturally, then, Torrance’s primary issue with apologetics is that it contradicts the fundamental axiom of his scientific theology, that true knowledge is knowledge in accordance with the nature of what we seek to know. Apologetics begins with what is rational to humans, and not that which is inherent to God’s own rationality as revealed in Jesus Christ. Human rationality must be disciplined by God’s rationality and not the reverse. God is not the object of human control; we are subject to God’s gracious will to reveal Godself. Torrance writes:

Thus the only kind of evidence for God that will satisfy us is one appropriate to divine nature, appropriate to one who is the ground of His own Being and the Source of all other being, to one whose Being is Spirit and whose nature is love… It is this profoundly simple fact, that knowledge of something and the demonstration of its reality must be in accordance with its nature, that lies behind the formation and deployment of the supreme instrument in all scientific knowledge, the appropriate question. (God and Rationality, 53)

For Torrance, apologetics is a false enterprise because it relies on asking the wrong kind of questions. It attempts to prove an abstract deity with a rationality alien to the given knowledge of God from the Father, through the Son, and in the Holy Spirit. Where apologetics asks speculatively, “Does God exist?”, theology focuses on Jesus Christ as God’s self-revelation, as the only true point of contact between God and humanity. Theology asks, “Who is this God revealed in Jesus Christ?” The difference is drastic. There is no logical bridge from humanity up into the knowledge of God, yet God has established, in Jesus Christ, a point of contact through Whom we know God. Thus, it is only by God that we come to know God. Torrance writes:

I cannot test whether there is a bad smell about by my ear. I cannot verify the presence of a chemical element in some compound by religious experience. Nor can I demonstrate a proposition in astrophysics by some line of reasoning in aesthetics. All that would obviously be irrational, just as irrational as it would be to put God to the test in some sort of way in which we put nature to the test in carrying through a physical experiment or to demand of Him that He disclose His reality to us through a radar telescope. (Ibid., 93)

The core idea behind kata physin is the notion that every reality has its own intrinsic rationality to know it by. Apologetics ignores this fact by applying a humanistic, philosophical, or an abstractly logical rationality onto the being of God, thus essentially subjecting God to the provability of human hands. In this sense, Torrance might heartily agree with Bonhoeffer’s famous remark, “A God who could be proved by us would be an idol” (Dietrich Bonhoeffer Works Volume 11, 260). When we attempt to prove God by a rationality alien to Godself, we ultimately produce a God fashioned after whichever rationality we implement; that is, God becomes an idol. Apologetics is a fundamentally flawed enterprise, since it fails to acknowledge God’s transcendent otherness. Torrance writes:

The transcendent rationality of God, however, is ultimate and as such can be known only out of itself. If God really is God He confronts us with absolute priority. In the nature of the case, He can be known only on the free ground of His own self-subsistent Being and through the shining of His own uncreated Light. The Truth of God cannot be demonstrated from other ground or derive support from lesser truths for He is the ultimate ground and support of them all… Knowledge of the ultimate rationality of God is reached at the point where our human reason becomes enlightened from beyond the limits of created rationality and where an infinite extension of intelligibility beyond ourselves is disclosed… (God and Rationality, 97)

We cannot illuminate God with human insights any more than we could brighten the moon with a flashlight. The doctrine of justification by grace alone should lead us to recognize God’s provability by grace alone. Works of the intellect cannot prove God without falling back into self–justification. God is known when God’s uncreated light reaches us from beyond our humanity, enlightening our rationality with the divine rationality of God’s self-revelation. God alone proves Godself if God is proven at all, just as God alone reveals Godself if we have any true knowledge of God’s innermost being.

Michael Polanyi reminds us in his Gifford lectures that we cannot convince others by formal arguments, for so long as we argue within their framework, we can never induce them to abandon it… That applies to theological communication as much as scientific controversy, and yet this is precisely the erroneous line taken so often by apologetics, whether by the theologian or the preacher… The only proper road to take at that point is to persuade those operating from the other frame to look away at the realities we seek to indicate, and to persuade them to take, in face of it, the kind of ‘heuristic’ [personal] step forward which we always have to make in any genuine scientific discovery, for only then will they discern and know for themselves what we are speaking about. That is to say, in theological language, we have to bear witness to the divine Truth, and try to get from others a genuinely open hearing, but if they take the heuristic [personal] step which they must if they are really to know, it will involve on their part a self-critical act in reconstruction of their prior understanding, i.e., what the New Testament calls metanoia [repentance]. (Theology in Reconstruction, 27-8)

We should not attempt to make the process easy for unbelievers, in the sense that we have to down-play the biblical call to repentance. Instead, Torrance thinks we must give witness to the truth of the Gospel without dumbing it down by attempting to remove the inherent offense of the good news. Torrance writes:

That is the real difficulty about the Truth of God as it is in Jesus, not a difficulty about language or history in the last resort, but an offense which reaches its climax in the Cross… The last thing we must ever attempt to do is to eliminate the real difficulties that confront us in the nature of the Truth itself, and so try to make it easy for people to believe and understand—in so doing, we make it next to impossible for them… If there were no offense, we would find nothing new in the Scriptures, hear nothing we could not and have not already been able to tell ourselves. That which challenges us, which calls us in question, is the radically new, the element we are unable to assimilate into what we already know, without a logical reconstruction of all our preconceptions and a repentant re-thinking of what we already claim to know. But that is the element in the Scriptures which makes them the means of bringing the Good News—yet in the nature of the case it is Good News, not of some cheap grace that heals the hurts of God’s people too lightly, but of radical and complete reconciliation to God through the Cross of Jesus Christ. That is the only message that really strikes home to the human heart and meets at last the desperate plight of man. (Ibid., 29)

Torrance’s scientific axiom that we know in truth only in accordance with what we seek to know (kata physin) means the rejection of apologetics as a false start. His scientific theology does not fit within the modern Christian “culture war” against science, but it does offer us a helpful way forward that is faithful to the Gospel and its call for repentance. Instead of diluting the Gospel with reductionistic logic, with mere human sensibilities, we must bear witness to God’s own transcendent rationality and call men and women to repent and know God on God’s terms.