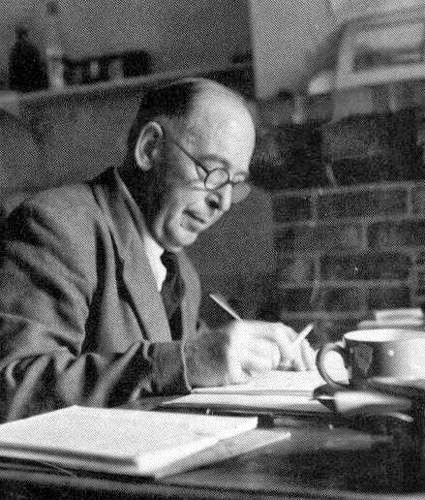 Today is the 50th anniversary of the passing of C.S. Lewis. C.S. Lewis is the author of over 40 books on apologetic, Christianity, and fantasy. His writings, especially his fiction books, have had a large impact on my life. So in his honor, I have collected 12 of my favorite thought provoking, quotes. Enjoy!

“In the Incarnation God the Son takes the body and human soul of Jesus, and, through that, the whole environment of Nature, all the creaturely predicament, into His own being.
So that ‘He came down from Heaven’ can almost be transposed into ‘Heaven drew earth up into it,’ and locality, limitation, sleep, sweat, footsore weariness, frustration, pain, doubt, and death, are, from before all worlds, known by God from within.
The pure light walks the earth; the darkness, received into the heart of Deity, is there swallowed up. Where, except in uncreated light, can the darkness be drowned?”
–Letters to Malcolm

“The gates of hell are locked from the inside.”
–The Problem of Pain

“To love at all is to be vulnerable. Love anything and your heart will be wrung and possibly broken. If you want to make sure of keeping it intact you must give it to no one, not even an animal. Wrap it carefully round with hobbies and little luxuries; avoid all entanglements. Lock it up safe in the casket or coffin of your selfishness. But in that casket, safe, dark, motionless, airless, it will change. It will not be broken; it will become unbreakable, impenetrable, irredeemable. The alternative to tragedy, or at least to the risk of tragedy, is damnation. The only place outside of Heaven where you can be perfectly safe from all the dangers and perturbations of love is Hell.”
–The Four Loves

“Joy is the serious business of heaven.”
–Letters to Malcolm

“The earth was of many colors; they were fresh, hot, and vivid. They made you feel excited, until you saw the Singer Himself, and then you forgot everything else.”
–The Magicians Nephew

“It is Christ Himself, not the Bible, who is the true Word of God. The Bible, read in the right spirit and with the guidance of good teachers, will bring us to Him.”
–Letters of C. S. Lewis

“It would seem that Our Lord finds our desires, not too strong, but too weak. We are half-hearted creatures, fooling about with drink and sex and ambition when infinite joy is offered us, like an ignorant child who wants to go on making mud pies in a slum because he cannot imagine what is meant by the offer of a holiday at the sea. We are far too easily pleased.”
–The Weight of Glory

“Wrong will be right, when Aslan comes in sight,
At the sound of his roar, sorrows will be no more,
When he bares his teeth, winter meets its death,
And when he shakes his mane, we shall have spring again.”
–The Lion, the Witch, and the Wardrobe

“The Happy Trinity is her home: nothing can trouble her joy.”
–The Great Divorce

“Redeemed humanity is still young, is has hardly come to its full strength. But already there is joy enough in the little finger of a great saint such as yonder lady to waken all the dead things of the universe to life.”
–The Great Divorce

“What, then, is the difference which He has made to the whole human mass? It is just this; that the business of becoming a son of God, of being turned from a created thing into a begotten thing, of passing over from the temporary biological life into timeless ‘spiritual’ life, has been done for us. Humanity is already ‘saved’ in principle. We individuals have to appropriate that salvation. But the really tough work–the bit we could not have done for ourselves–has been done for us. We have not got to try to climb up into spiritual life by our own efforts; it has already come down into the human race. If we will only lay ourselves open to the one Man in whom it was fully present, and who, in spite of being God, is also a real man, He will do it in us and for us. Remember what I said about ‘good infection’ One of our own race has this new life: if we get close to Him we shall catch it from Him.”
–Mere Christianity

“And that, by the way, is perhaps the most important difference between Christianity and all other religions: that in Christianity God is not a static thing–not even a person–but a dynamic, pulsating activity, a life, almost a kind of drama. Almost, if you will not think me irreverent, a kind of dance.”
–Mere Christianity

What are some of your favorites? Share them below!