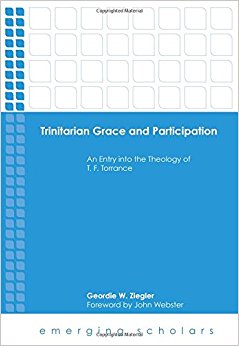 Book: Trinitarian Grace and Participation: An Entry into the Theology of T. F. Torrance by Geordie W Ziegler (Amazon link)

Overview: Ziegler’s book is quite an achievement, with clarity and precision he embarks on the difficult task of exploring Thomas F. Torrance’s complex thought. The book emphasizes what Ziegler calls “a deeper strata of Torrance’s theology: his theology of grace, in which all other doctrines find their interior logic.” 1 This is a highly commendable and insightful reading of Torrance, recommended for anyone interested in his work.

I enjoyed this book from Georgie W Ziegler. I’ve read a fair amount of Torrance’s work, though I’m only beginning to explore the ever-expanding collection of secondary literature on Torrance. Ziegler’s book stands out from what I have read so far.

Colyer’s classic, How to Read T. F. Torrance, for example, is quite dull in comparison. Which is not to say that Colyer’s book is worse or in any way inaccurate—it is a very helpful book—but I think Ziegler captures the heart of Torrance’s theology better by emphasizing grace and participation as central concepts in his thought. His clarity and joy kept me engaged, shedding profound light on some of Torrance’s more complex subjects.

By emphasizing grace and participation Ziegler kept central what has always attracted me the most about Torrance’s theology: the profoundly evangelical character of everything he writes. Torrance is an excellent scholar, he’s a brilliantly constructive theologian, and his engagement with science is fascinating; but more than all that Torrance was a pastor and an evangelist. Even his engagement with science, Torrance once remarked, falls within the context of being an evangelists to the scientists. Torrance is a true evangelical theologian.

Furthermore, by focusing on grace and participation Ziegler is able to shed new light on some of Torrance’s difficult concepts (by placing them within their proper content). One instance that comes to mind is the insightful discussion of the anhypostasia and enhypostasia (the an/en couplet) in Torrance’s thought, and how it relates the human agency. Ziegler writes,

In Torrance’s view, the an/en couplet opens up conceptual space for a dynamic way of describing divine and human agency in Christ that illuminates the key features of the motion of Grace, which Chalcedon’s negative assertions fail to capture. While the person of the Son remains the single hypostasis or agent of the God-human, the human Jesus is no mere instrument in the hand of God, but a full human person with human body, mind, reason, will and soul. For Torrance, the doctrine of two wills (2nd Council of Constantinople [680AD]) is a critical move which discloses the ontological nature (as well as the nature of the ontology) at the inner heart of the atonement. Were Christ to only have one will there would be no historical (lived) means for the divine Word to reorient that will. Here in the will of Jesus Christ, the divine will and the human will coexist without confusion or separation and in that onto-relational coexistence, the will of estranged man is bent back into oneness with the divine will through the sanctifying obedience of Christ. Through the concept of the an/en hypostasia combined with the doctrine of two wills in the Person of Christ, Torrance is able to hold incarnation and atonement together such that atonement takes place within the person of Christ himself as he personally mediates the two natures.

Combining the an/en with the biblical material, the pattern can be expressed in the following way: as triune Grace is always both downward and two-fold and always both anhypostatic and enhypostatic, so also is the life of Jesus—always simultaneously, the Son sent from the Father in the Spirit and the Son in the Spirit offering his life to the Father. 2

This helps clarifies an important phrase Torrance often repeated, that, “All of grace does not mean nothing of man [but, rather,] all of grace means all of man.“ 3

Discussions about God’s grace often have difficulty answering the question of human agency. Far more than perhaps any theologian I’m familiar with, Torrance’s emphasis on the vicarious humanity of Christ and his nuanced approached to the anhypostasia and enhypostasia is a profoundly helpful response to the question of grace and human agency. Ziegler’s discussion of this aspect of Torrance’s thought is very insightful and helped me understand this couplet better than I had before.

In conclusion, this book is an excellent study of Torrance’s thought, very insightful, profound, and clear. However, I doubt it works as an introductory book. I do not know if this was Ziegler’s intention, but from the subtitle it seems to me that Ziegler hoped his book would be readily accessible to the average reader. It wouldn’t be impossible for an amateur to read it, no doubt, but I think it would be quite difficult nonetheless. Some basis in Torrance’s thought will be helpful before reading. Although, that does not deter from the excellent of his book. I recommended it to anyone interested in Torrance.