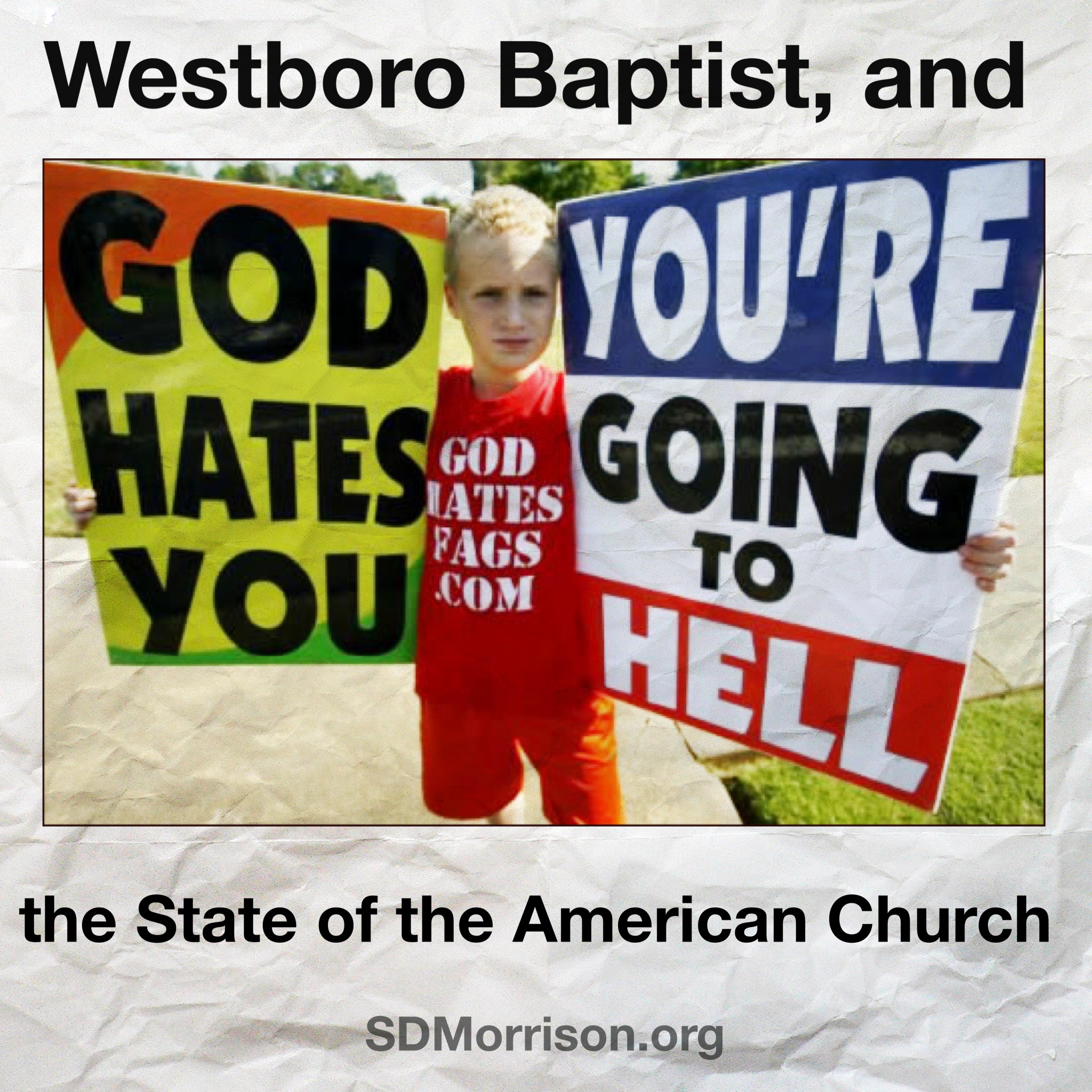 I was watching a documentary the other day, and at one point they interviewed the infamous Westboro Baptist Church. I’m putting it lightly to say that I was disgusted. How can someone misunderstand God so much?

In this documentary, the interviewer was asking some of the members of WBC what they thought about the love of God. To sum it up for you, the love of God, according to WBS, is 1) conditional 2) limited to only .001% of the population and 3) only secondary to the fiery hatred of God.

Now I’m not here just to rant about WBC. As much as I agree they’re a problem, I believe that there is a much larger theological issue at hand hiding behind the WBC.

The sobering reality is that Westboro Baptist is just the tip of the iceberg. Fundamentalism, while disagreeing with the extreme methods of WBC, ultimately agrees with their message: that God hates.

Let’s look at this:

Now, here’s a direct quote from a well known American fundamentalist pastor, “God hates you! God is sick of you! God is frustrated with you! God is wearied by you!”  2

Wait, what? Is this supposed to be good news? 3

Some have tried to justify messages like this by saying that while God does hate people, He also loves them. Saying things like “God loves you, and hates you.” Which in my mind, creates an even bigger problem. Does God suffer from schizophrenia? Is God split up into multiple personalities?

But this, sadly, is exactly what’s taught in many American churches today. They have fallen in bed with western dualism, and have created a bi-polar God with multiple personalities. Essentially practicing mythology, not Christianity.

Fundamentalism has created a God who looks far more like Zeus, than Jesus.

The truth of the matter is this. While we may disagree with the methods of the Westboro Baptist Church, when you get down to it, much of American Christianity believes the very same things that WBC believes. i.e. God hates everyone, most people go to hell, and God’s love is only for the elect.

Fundamentalist theology in the Christian church is one of the most vile, twisted, and to be blunt: evil beliefs today. It is far worse than any other sect of Christianity, in my opinion, because Fundamentalists change the nature of God. They have created a hateful deity who, conveniently, hates all the same people they hate. Namely: homosexuals, liberals, democrats, and muslims.

Fundamentalism is the greatest enemy to the Gospel in America today. Fundamentalism spits in the face of the goodness of God, and of the love of God.

Westboro Baptist Church may be extreme in their actions, but, for the most part, Fundamentalist Christianity shares a similar theology. 4

So is Westboro Baptist Church a problem? Sure. But if we’re going to admit that, let’s get really honest about the state of the church. WBC is the tip of the iceberg. Fundamentalist Christianity has corrupted the face of God, and turned the God of infinite love into the God of infinite hatred. It’s sick, and terrifying.

The reaction of Fundamentalism to Homosexuality—for example, when they called for a boycott of World Vision because of their stance—is an insult to the message of Jesus.

Take a hard look at Christianity today, and I’m afraid you will find that the horrid beliefs of WBC are shared by a large portion of American Fundamentalist Christianity. 5

It breaks my heart to know that this message of hatred is rampant in the world today. It terrifies me to think about all the lives who have rejected God after falsely being taught the fundamentalist version of god. (One of hatred, judgement, and intolerance. A myth!) But this is all the more a reason for me to continue preaching the outrageous love of God, and His endless acceptance of the human race!

Preach the Gospel. Preach the kindness of Jesus. Preach His mercy, forgiveness, grace, and love.

God is good, He loves the world, He accepts the world, and He has gone and done all that needs to be done in Jesus Christ to forgive the world of sin. That’s Good News!

What do you think? Do you think Fundamentalism is a problem? How so? Leave me your thoughts below!